Mark Ingram to grace the cover of NCAA Football '12

While my colleague Joe Fortenbaugh keeps you up to date on the race to net the honor of Madden '12 cover boy, former Alabama running back Mark Ingram has already been announced as the cover athlete on Electronic Arts' wildly popular NCAA Football ’12 college football video game. 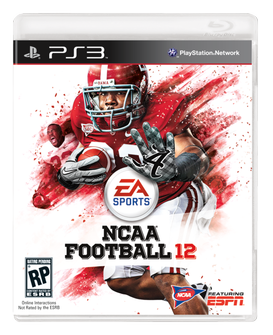 Mark Ingram will grace the cover of NCAA Football '12.

The announcement was made on ESPN 2′s First Take Tuesday morning.

The 2009 Heisman Trophy winner is the second Crimson Tide player chosen as the game's cover athlete and the ninth Hesiman winner overall to be selected.

EA held an online election over the last few months on Facebook so fans could choose who would get the honor. Ingram beat out Washington quarterback Jake Locker, Auburn defensive tackle Nick Fairley and Oklahoma running back DeMarco Murray.

In his final season in Tuscaloosa in 2010, the 5-9, 215-pound Ingram rushed for 875 yards and 13 touchdowns. He is expected to be the first running back selected in April's NFL Draft.

NCAA Football ’12 is expected to be available on July 12.