Masoli to walk on at Ole Miss

As if the SEC ever needs any added intrigue, Ole Miss just brought a whole lot more of it into the conference.

After head coach Houston Nutt offered him a place on the Rebels as a walk-on following a visit to Oxford this weekend, Jeremiah Masoli accepted the invite and will be eligible to play this fall.

The former Oregon quarterback, who was dismissed from the Ducks after two run-ins with the law, acknowledged on his website Sunday that he will play at the SEC school. 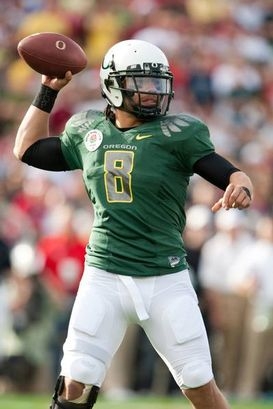 “I am very excited about this opportunity and very thankful Ole Miss is giving me this chance,” Masoli wrote on the home page of www.jeremiahmasoli.net. “I really want to thank Coach Nutt for believing in me.”

Because the California native earned his undergraduate degree and is enrolling in graduate school, he can play immediately under NCAA rules. On his website, he also said that he will enter the parks and recreation management program.

Nutt and the Rebels instantly become better with the addition of Masoli even when factoring in how late it is in the summer that the signal-caller is coming on board. Rebels newcomers will report to camp August 8 and he isn’t even versed in the team’s offense yet.

However, not only does he possess the talent of a Heisman Trophy contender following his outstanding ‘09 season for the Ducks, but Masoli is a perfect fit for Nutt’s Wild Rebel offense. If he picks up the playbook within a month, there’s no doubt that his talent instantly makes the team’s offense much better.

Nate Stanley is currently in line to start under center for Ole Miss, but he played sparingly last season. He was, however, solid while subbing for the injured Jevan Snead in the Cotton Bowl last January. With the recent transfer of Raymond Cotton, the only other quarterback on the roster is junior-college transfer Randall Mackey.