In case you're not familiar with Jadeveon Clowney, he's the nation's No. 1 high school prospect in the Class of 2011. And if you're a college football fan, you better get used to hearing his name the next couple of weeks.

The South Pointe High School (Rock Hill, S.C.) defensive end, who was the 2010 USA TODAY Defensive Player of the Year, is the most targeted player by major-college coaches on the recruiting trail. However, we likely won't find out which college Clowney plans to attend on National Signing Day. 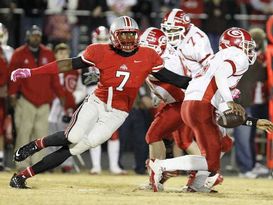 Jadeveon Clowney is the nation's No. 1 high school prospect in the Class of 2011.

According to South Pointe athletic director Michael Drummond, Clowney probably will wait until his birthday, Feb. 14, to sign with the college of his choice.

This is nothing new for a top high school prospect such as Clowney, who has a few more college visits scheduled and is waiting for his first-semester grades. Other top players in the past have dragged out the process, opting to wait on selecting a college until after National Signing Day, which is Feb. 2.

Clowney did, however, narrow his list of finalists to Miami, Florida State, Alabama, South Carolina and LSU.

Check out the best of Clowney from his senior year at South Pointe. The highlights include play from the regular season and playoffs, including the 3A state title game.

Video is courtesy of AthleteVault.com