Let's take a look at some of the most important aspects of this matchup between the Gophers and the Red Raiders. 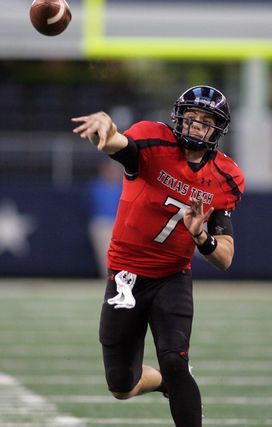 US PRESSWIRESeth Doege has thrown 38 TD passes this season, just two behind West Virginia's Geno Smith for the national lead.

• Don't dismiss the run game: We know that Texas Tech loves to throw the football, as quarterback Seth Doege has tossed 38 touchdown passes this season, just two behind West Virginia's Geno Smith for the national lead. Doege needs just 66 yards to become the 10th NCAA quarterback to post at least two 4,000-yard passing campaigns in his career. But his productivity has leveled off a bit, as he has thrown just 10 scores against seven interceptions in the Red Raiders' last six games. Sometimes too much pressure seems to be on whoever is the QB in Lubbock. Offensive line coach Chris Thomsen, who has taken over as interim head coach with Tommy Tuberville leaving for Cincinnati, and receivers coach Sonny Cumbie, who will call the plays with offensive coordinator Neal Brown out of the picture, should not overlook the fact that Eric Stephens, Kenny Williams and SaDale Foster are very capable running backs. The Red Raiders ran for 208 yards against Baylor, and Minnesota ranks No. 77 in the nation in rushing defense. I have a feeling that Cumbie, while not experienced as a play-caller, will lean more heavily on the ground in this one.

Strength vs. Strength: Even if the Red Raiders run a bit more than usual, they will still take to the air with Doege, as they have the No. 2 passing attack in the country at 362 yards per game. But Tech may have a little bit more trouble than usual throwing the football as Minnesota has been very good defending the pass this fall. The Gophers have the nation's No. 11 pass defense, led by corners Michael Carter and Troy Stoudermire. Safety Derrick Wells will also be a key defender in this matchup, especially against some of Tech's inside receivers. But as good as the Gophers' secondary has been, it will only be as good as their pass rush against a pass-happy Tech squad. Can D.L. Wilhite and Ra'Shede Hageman get in Doege's face?

Versatility with Gray: The Gophers struggled offensively throughout 2012, scoring 14 points or less in all six of their losses and ranking No. 114 in total offense. They have had numerous injuries at quarterback, receiver and across the offensive line, but the long layoff could have been the tonic this team needed. If Jerry Kill's squad is going to pull the upset, senior quarterback/receiver MarQueis Gray needs to be at his best. Offensive coordinator Matt Limegrover will use Gray in a variety of ways, even with true freshman Philip Nelson under center. Top tailback Donnell Kirkwood will also need to be productive on the ground. But with depth issues at receiver, Limegrover needs to be flexible and creative — get Gray involved as much as possible whether at QB or WR because he is the team's best offensive performer. Texas Tech's defense is much improved, but it has struggled to create turnovers in the latter portion of the season.