South Florida and Clemson kick off Friday’s bowl action when the teams square off in the Meineke Car Care Bowl.

Here’s a look at the matchup between the Bulls and Tigers.

South Florida: Head coach Skip Holtz is playing it coy regarding his quarterback situation, as his own players don’t even know who will line up and take the first snap under center. The former UConn and East Carolina head coach would only say that both Bobby Eveld and B.J. Daniels would play against the Tigers. If healthy, I can’t see how Daniels doesn’t start. But I was surprised by how much Holtz tried to bottle up Daniels and make him a pocket passer this year rather than adjusting his scheme to the personnel. Daniels never looked comfortable this year, as he didn’t have the green light to act on his natural ability and turn it loose. That unpredictability — while it cost the Bulls at times last season — will be needed against a physical and speedy Clemson front four. The Bulls will also need to get Moise Plancher (743 yards) and Demetris Murray (508 yards) going on the ground to keep the Tigers defense honest. 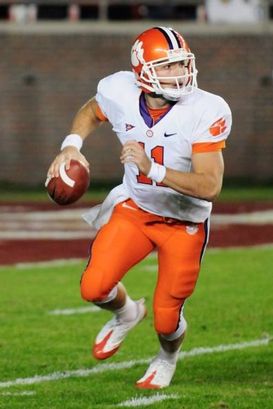 ICONClemson's Kyle Parker looks to finish his college career on a high note.

Clemson: This certainly wasn’t the season Kyle Parker envisioned when he decided to return to school for his sophomore campaign and stave off his baseball career for another season. But losing Jacoby Ford and C.J. Spiller hurt the Tigers offense, and Parker just never was in sync. Jamie Harper ran for more than 140 yards against both Florida State and Wake Forest late in the year with Andre Ellington shelved, and he’s going to need another stellar effort to help out a passing game that just doesn’t have many playmakers. But Harper has been inconsistent, so we’ll see if he can continue his late-season momentum. Look for backup and next year’s starter Tajh Boyd to see time under center, as well.

Both teams have really struggled moving the ball and scoring points. In a game featuring teams with sputtering offenses, it’s often the team with the biggest difference-maker on defense that has the advantage. In this case, it’s Clemson with Da’Quan Bowers. Bowers leads the nation with 15.5 sacks and the Bulls must be able to keep him out of the face of Daniels and/or Eveld. If the quarterback can stay upright, USF can find some plays in the passing game against a questionable Clemson secondary. Keep in mind that the Bulls only lost by three points to UConn in the regular-season finale and were able to slow down All-American running back Jordan Todman.

This is a Clemson team that expected to return to the ACC title game even after suffering a couple of personnel losses on offense. I’m not sure how much the Tigers want to be at this game. Could special teams be the difference, where USF's Terrence Mitchell and Lindsey Lamar have excelled in the return game?

• South Florida head coach Skip Holtz earned one of the biggest wins of his career at Bank of America Stadium on Aug. 30, 2008, when East Carolina beat Virginia Tech 27-22.

• USF is one of only six schools to have made a bowl in every year of its membership in a BCS league.

• Both teams are in the Top 25 in scoring defense and total defense.