Bowl season continues on Monday with the inaugural Miami Beach Bowl between Memphis and BYU at Marlins Park.

Let's take a closer look at the matchup between the Tigers and the Cougars.

Justin Fuente did a wonderful job of coaxing nine wins out of the Tigers, and the nine regular-season victories are the program’s most since 1963. The American Athletic Conference co-champions claimed their first conference crown since 1971 and are looking for a bowl win for the first time since 2005, when the Tigers beat Akron 38-31 in the Motor City Bowl. Fuente is one of the hottest rising head coaches in the Group of Five, so Tiger fans should enjoy his tenure because he may not be in town for much longer despite inking a contract extension. Memphis, which is on a six-game winning streak and has a chance to reach double-digit wins for the first time since 1938, has an offense averaging 34.7 points per game behind quarterback Paxton Lynch and running back Brandon Hayes. And the strong defense is led by linebacker Tank Jakes, who was the AAC co-defensive player of the year and helped the Tigers hold teams to 10 points or fewer on four occasions. 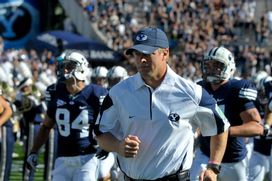 ICONBronco Mendenhall and the Cougars have won four straight games.

<p> Bronco Mendenhall's Cougars went through a four-game losing streak but finished the regular season with four straight wins. All eyes will be on Christian Stewart, who stepped in at quarterback after a season-ending knee injury to starter Taysom Hill in early October. The senior completed 59 percent of his throws for 2,273 yards and 22 touchdowns against six interceptions. In the finale against Cal, he threw for 433 yards and five scores, but the Tigers have allowed just 11 scores through the air on the season. Barry Odom may be the nation's most underappreciated defensive coordinator, but Stewart has some nice weapons at his disposal, including a receiving corps led by Mitch Mathews and Jordan Leslie. However, the Cougars don't have much of a ground game without Jamaal Williams, who was knocked out this year with a knee injury. But a lot of college football fans should be rooting for Stewart because his story is phenomenal. The signal-caller was on the scout team at BYU in 2008 before going on a two-year mission in Japan. He then went the JUCO route before going back to BYU with no football plans. After being persuaded to re-join the team, he became the starter when Hill was injured. Unreal.

Other notes: This is the first bowl game to be played in the city of Miami in 16 years, as the Orange Bowl is played at Sun Life Stadium in Miami Gardens ... Memphis and BYU have never played ... Memphis has been ranked just once in the AP Top 25 poll, at No. 25 for one week in 2004 ... BYU has never won in the state of Florida. The Cougars have bowl losses in 1976 and 1985 as well as two defeats to Florida State and one to Central Florida in the regular season.