The move comes amid rumors that he and tackle Seantrel Henderson were going to be suspended. Armstrong reportedly had interaction with a booster while Henderson's violation was reportedly for an unspecified rules violation. 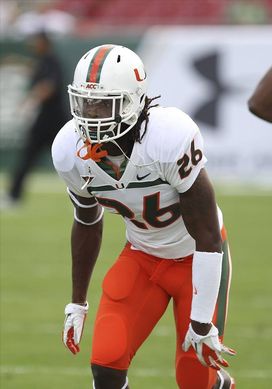 ICONOff-the-field issues have led to the dismissal of Miami safety Ray-Ray Armstrong.

Armstrong, who was named to the Bednarik Award watch list, had four interceptions over the past two seasons but has seen his NFL Draft stock tumble because of off-the-field issues.

The senior only played in seven contests last season after being suspended for four games because he accepted gifts from a former booster. He missed another game while the school checked if other violations were committed when Armstrong dined with a friend who works in a public relations firm that handles pro athletes.

Miami said it would give him a full release if he decides to transfer.

Former quarterback A.J. Highsmith is behind Armstrong on the depth chart and will enter preseason camp as the projected starter.

Depth could be an issue in Coral Gables this season, specifically on the defensive side of the ball, after numerous early exits to the NFL.