Miami (FL) delivers another huge win for the ACC

It may be a bit premature to say that The U. is back, but it probably isn't going away any time soon either.

Miami (FL) knocked off No. 12 Florida 21-16 on Saturday at Sun Life Stadium, giving the ACC a signature victory over an SEC foe for the second week in a row. Of course, Clemson began to carve its path for a potential run at a BCS national championship game berth last week with a win over Georgia in Death Valley.

Despite going just 1 of 11 on third downs, being outgained by 201 yards, losing the time of possession battle by about 17 minutes and only having three drives that went for longer than four yards (50, 50 and 84), the Hurricanes knocked off UF by forcing five turnovers — including a Jeff Driskel interception and fumble in the final seven minutes of the game — and using the Gators' incompetence in the red zone to their advantage. 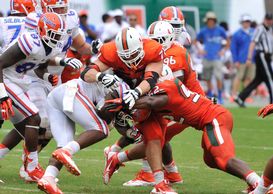 US PRESSWIREAnthony Chickillo, Denzel Perryman and the Miami defense played big against UF.

Florida turned the ball over just 15 times in 2012 but gave it away three times in the first half alone against the 'Canes. Behind two touchdown passes from Stephen Morris, who went just 12 of 25 passing for 163 yards, Miami was up 14-6 after a quarter of play. Florida gave up 14 points in the first quarter just once a year ago, in the Sugar Bowl loss to Louisville. Because of its putrid play in the red zone, Florida trailed at the half.

And despite a strong effort by its defense in the second half, Florida could not get out of its own way on offense.

Miami, which had just 69 yards of total offense in the final three quarters, beat the Gators for the seventh time in the last eight meetings. And it might be the last time the two programs meet for quite awhile because of scheduling conflicts.

So what does the future hold for the 'Canes?

Well, Al Golden's squad does not play Clemson this season, which means that its bout with Florida State on November 2 remains its toughest test outside of a potential ACC title game. However, the 'Canes also have to contend with high-powered offenses such as Georgia Tech and North Carolina. So nothing is guaranteed.

But there's no question that The U. recorded a signature win on Saturday afternoon, and it's likely that the NCAA's investigation was the furthest thing from anyone's mind. If Mark D'Onofrio's defense can play this strong consistently and Morris can become more crisp with his passes, this remains the most dangerous team in the country.