Miami (FL) has landed quarterback transfer Jake Heaps, who has started at both BYU and Kansas during his college career. 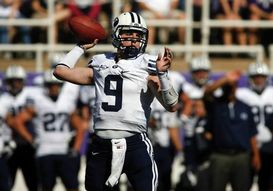 ICONJake Heaps was one of the top-rated pro-style QBs in the country when he arrived at BYU.

Heaps, who graduated from Kansas and will be eligible to play immediately this season in Coral Gables for one final campaign, was a member of the Cougars’ 2010 recruiting class as one of the top-rated pro-style signal-callers in the country.

But the Washington native left BYU after starting 16 games and playing in another six during his freshman and sophomore seasons. He set school freshman passing records for yards, touchdowns and wins, and he was named the 2010 New Mexico Bowl offensive MVP for his 264-yard, four-touchdown performance. But he eventually lost his starting gig to Riley Nelson during his sophomore season.

With projected starter Ryan Williams shelved after tearing his ACL and his future uncertain, the 'Canes have been preparing redshirt freshman Kevin Olsen for starting duties. But his inexperience could be a real detriment to the Miami (FL) offense in 2014, so the arrival of Heaps could be good news for the 'Canes and should make preseason camp even more intriguing for head coach Al Golden and his offensive staff.

In addition to Heaps, Williams and Olsen, the 'Canes also have redshirt sophomore Gray Crow and true freshmen Brad Kaaya and Malik Rosier on the depth chart at quarterback.

Miami (FL) opens the 2014 season on September 1 against Louisville, which is debuting in the ACC.