Michigan cornerback out for the season

About the last thing Michigan needed was another injury to an already porous secondary, but that’s exactly what the Wolverines were dealt Tuesday at practice. Starting cornerback J.T. Floyd injured his ankle and will miss the rest of the season, a tough blow for a Wolverines squad on a three-game skid. 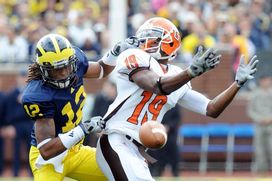 ICONMichigan CB J.T. Floyd is out for the year with an ankle injury.

Head coach Rich Rodriguez said Floyd suffered ligament damage and will undergo surgery. Although the ankle isn’t broken, Floyd could be sidelined through practice next spring.

Michigan was already thin at cornerback after player departures and an injury before the season to Troy Woolfolk, who was a projected starter. True freshman Courtney Avery is likely to take Floyd's spot starting Saturday against Illinois.

Floyd started all eight games for the Wolverines and ranked third on the team in tackles with 66. He also had an interception, a forced fumble and four pass breakups.

Senior James Rogers is the only non-freshman at cornerback for Michigan.