The Michigan-Michigan State football rivalry may have become even more heated after several Spartans went on Twitter and insulted the play of Wolverines quarterback Denard Robinson on Saturday night during Michigan's 41-14 blowout loss to Alabama. 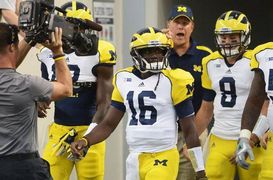 The senior dual-threat signal-caller finished with 200 passing yards against the Crimson Tide, but he threw two interceptions and finished just 11-of-26 passing and only 27 yards on the ground.

The commentary on the social media site included the following:

"DENARD IS SOOOO BAD! And it makes me feel so good." - safety Kyle Artinian.

"I can play quarterback for the school in blue. (Le'Veon Bell) for heisman > the other guy in the great state of michigan." - linebacker Jamal Lyles

Some of the Tweets were later deleted.

Michigan State, which opened its season with a bit of a lethargic win over Boise State on Friday night, has been able to slow down Robinson when the two teams have matched up. Of course, the Spartans own a four-game winning streak in the rivalry. The in-state rivals play again on October 20 in Ann Arbor.