Need a reason to be even more pumped for the games on Saturday? Check out the NFP Saturday Tailgate tomorrow morning, where I'll fill you in on all the news, notes and major storylines being played out across the country.

Finally, in Week 8 of the 2010 campaign, Michigan State will play a game outside of the state of Michigan.

Yes, everything has gone right for the Spartans thus far as they are off to their best start since 1966.

A trick play at the end of the game to stun Notre Dame. An assistant stepping in and leading the team for two weeks while the head coach dealt with a health scare. Outmuscling a Wisconsin team that is known for winning the battles along the line of scrimmage — the same Badgers that knocked off formerly top-ranked Ohio State last week. Beating rival Michigan for the third straight season. And not having to face a Buckeyes team that certainly will be driven by their lone defeat.

Seven wins and no defeats, with fans from across the state able to see them in their own backyard. 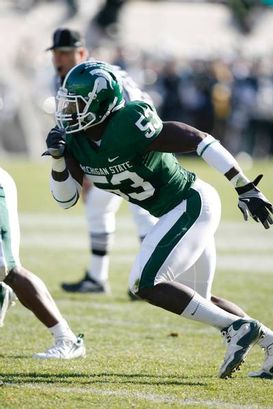 ICONMichigan State linebacker Greg Jones is a semifinalist for the Butkus Award.

But that all changes on Saturday when the Spartans play on the road for the first time in 2010 in Evanston against Northwestern (5-1, 1-1) in a Big Ten tilt. Of course, Ryan Field is likely to be flooded with as much green as there will be purple — perhaps even more. So MSU should feel at home, just as the team was in Ann Arbor when they beat the Wolverines and made Denard Robinson look human.

The early forecast Saturday calls for steady rain, which could mean the Wildcats will face an even heavier dose of Edwin Baker and Le'Veon Bell, the rushing duo that has combined for 1,268 yards and 14 touchdowns on the season. Throw in a little play-action from quarterback Kirk Cousins, and you have a lethal combination.

But is this a trap game for the Spartans? Will they be looking ahead to next week when they travel to Iowa City and take on Kirk Ferentz and the Hawkeyes?

With a coaching staff that has pushed all the right buttons so far this season, I don’t see how Dantonio and Co. allows that to happen. But it doesn’t mean the Spartans won’t be in for a fight.

Pat Fitzgerald’s Wildcats have had two weeks to prepare for this contest, and they’re likely ready to take out their frustrations after a very disappointing 20-17 loss to Purdue under the lights at Ryan Field. The undermanned Boilermakers gave the Wildcats their first loss of the season despite only throwing for only 47 yards. It helped that they churned up 232 yards on the ground behind running quarterback Rob Henry. And that the ‘Cats had a 41-yard Stefan Demos field-goal attempt blocked. Demos also missed a 45-yard attempt with 1:01 to play that sealed the loss.

I was in Evanston for that contest, as I will be for the game against the Spartans, and let’s just say that Demos was not the most popular player on campus that night.

NU is back to being the underdog, which could be a good thing considering we’re more used to the “Cardiac ‘Cats” than the “Favored ‘Cats” anyway. They notched two upset wins over ranked teams last season, and a team always has a chance with a talent such as Dan Persa under center. The first-year starter is completing 78 percent of his passes and has a 5-to-1 touchdown-to-interception ratio on the year. 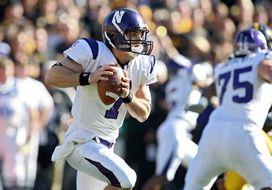 ICONDan Persa is completing 78 percent of his passes and has a 5-to-1 TD-to-INT ratio.

But Persa also poses a threat on the ground, which has been critical to the success of the ‘Cats because the foursome of Arby Fields, Jacob Schmidt, Mike Trumpy and Stephen Simmons hasn’t exactly given NU a balanced offense from the tailback position.

You want balance? Check out the other sideline, where the Spartans possess it on both sides of the ball. We know about the offense, but the defense has improved dramatically against the pass and the unit was able to thwart the Wolverines’ Robinson off his Heisman course.

There’s no question that the Wildcats pose a threat — like any remaining team on MSU’s schedule. But having questionable special teams and taking bad penalties will do in any team against a squad that always seems to feel at home.