Let's take a look at some of the storylines that will play out over 15 practices as the Spartans prepare for their spring game on Saturday, April 28.

Is Maxwell ready to replace Cousins?

Kirk Cousins was one of the Big Ten's most accomplished Big Ten players both on and off the field the last three seasons, so new starting quarterback Andrew Maxwell has some big shoes to fill. Head coach Mark Dantonio and his staff believe that Maxwell is ready to start, but he still has only attempted 51 passes as a backup in his career. The most important thing he needs to do during spring drills is make his teammates look at him as a leader. Talent is one thing, but being able to get your teammates to rally around you and deal with being the voice of the offense is another. The good news for Maxwell is that he will be operating behind a strong and deep offensive line -- seven players with starting experience return up front. And MSU should have a strong rushing attack led by Le’Veon Bell, whose presence helped nudge Edwin Baker out the door a year early and declare for the NFL draft. Larry Caper and Nick Hill will provide good depth in the backfield.

Are there enough offensive weapons? 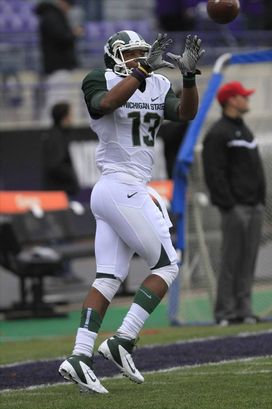 ICONBennie Fowler will be expected to be a big presence in MSU's passing game.

The Spartans lose their top three receivers from last season: B.J. Cunningham, Keshawn Martin and Keith Nichol, a group that combined for 395 catches and 5,425 yards in their careers. That's a ton of experience that won't be around to help out the new starting QB. However, major help could be on the way in the form of Deanthony Arnett, who is trying to get a hardship waiver from the NCAA. The transfer from Tennessee, who is from Saginaw, said his father has had multiple heart attacks and is on dialysis, so he wanted to be closer to home. If he is eligible to play this season, that would boost a receiving corps that is currently relying on Bennie Fowler, Keith Mumphery and Tony Lippett, who recently switched back to receiver after moving to cornerback. Fowler, however, will miss at least the first part of spring drills with a foot injury. Also keep an eye on tight end Dion Sims as a middle-of-the-field option for Maxwell. The Spartans do have the luxury of having several freshmen receivers arrive in the summer, but it will be vital for Maxwell to develop rapport with the pass-catchers that are in East Lansing this spring.

Is the defense Worthy?

While the Spartans return eight starters to the defensive side of the ball, replacing defensive tackle Jerel Worthy is coordinator Pat Narduzzi's most pressing issue. Fellow tackle Anthony Rashad White returns, but three reserve DTs have moved on, so that position is thin. Former end Tyler Hoover has moved inside to help out, and Vanderbilt transfer James Kittredge as well as Damon Knox will have an opportunity to step in for Worthy. But there will be a dropoff in production. The good news is that the Spartans have depth at defensive end.

Other news and notes

• Senior starting linebacker Chris Norman will be shelved this spring with a shoulder injury.