Michigan received some very good news this past Tuesday when it was announced that the Big Ten granted quarterback Devin Gardner a medical hardship for the 2010 season, which gives him two more years of eligibility with the Wolverines.

While there's no guarantee that the athletic signal-caller will use his extra year of eligibility if he has a big year in 2013, the Wolverines could have some intriguing options under center in 2014.

But how does the Michigan offense currently set up entering spring drills as the team prepares for next fall? 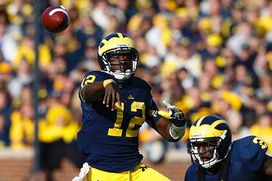 US PRESSWIREDevin Gardner could wind up running Michigan's offense beyond 2013.

Gardner, who will be a fourth-year junior in the fall, really sparked the offense late in the 2012 season after Denard Robinson was injured. Moving back to quarterback after playing wide receiver, Gardner completed 75-of-126 passes for 1,219 yards and 11 touchdowns against five interceptions. He also rushed for seven scores after catching 16 passes for 266 yards as a receiver. The dual-threat was twice named Big Ten offensive player of the week and really stood out as a more natural fit for the Wolverines offense. And it's because of his return in 2013 that Brady Hoke, Al Borges and the rest of the coaching staff are excited.

With Robinson and Fitz Toussaint gone, the Wolverines are desperate for a lead running back to emerge to complement Gardner and the passing game. And that's exactly why landing one of the nation’s top prospects, Derrick Green, was huge. The Virginia native ran for 1,285 yards and 20 touchdowns on 184 carries last season and has the body to be an every-down back. And, first and foremost, the Wolverines want to run the football.

At receiver, Michigan loses only one key player: Roy Roundtree. Unfortunately, he was a four-year starter who finished his career with 154 catches for 2,304 yards and 15 touchdowns. But seniors Jeremy Gallon and Drew Dileo are back after combining for 511 yards and three scores in the final five games. However, this team is desperate for senior Jeremy Jackson or sophomore Amara Darboh to step up and be a major contributor next season. Redshirt freshman Jehu Chesson will also compete for reps. Turning inexperienced receivers into productive commodities as well as replacing the entire interior of their offensive line will be two key storylines to watch for the Wolverines this spring.

While Gardner certainly has been expected to use this offseason to further develop as a passer and become a better student in the film room, his combination of size and speed as well as the accuracy he displayed last year in his extended playing time has created a lot of excitement in Ann Arbor as Hoke continues to re-make this program into an upper-echelon Big Ten squad once again.

And if Gardner elects to come back for a final season in 2014, the Wolverines will have a good problem on their hands at the quarterback position.

Last month the program signed quarterback Shane Morris, who was a national Top 10 signal caller and a player that many believed was in line to get the starting nod in 2014. Now, Morris could possibly redshirt this fall and back up Gardner in 2014. Russell Bellomy also could be in the mix, although he struggled when replacing Robinson this past season. However, if Gardner moves on, Morris could be back in the starting mix in a year. Either way, Gardner's extra year possibly gives the coaching staff some relief.

But, for now, all of the focus remains on getting ready for the 2013 campaign, with spring practice beginning on March 16. And after his strong end to the 2012 season, Gardner will be the focus of the offense as the Wolverines move more toward the pro-style system that Hoke envisioned upon his arrival in Ann Arbor.