Because we are roughly at the midway point of the 2013 college football season, let's take a look at the biggest surprises and biggest disappointments of the year thus far.

Missouri: The Tigers are 6-0 and atop the SEC East after their statement win over Georgia in Athens this past weekend. In its second season in its new league, Gary Pinkel's squad was getting strong play from quarterback James Franklin, production from numerous surrounding playmakers and a defense that has played sound all season led by its disruptive front. But the win over the Bulldogs came at a cost, as Franklin will miss at least the next three games and possibly more. Can Maty Mauk step in and be serviceable at QB? Mizzou has Florida and South Carolina at home the next two weeks.

Zach Mettenberger: I discussed the emergence of the LSU quarterback throughout the offseason at the NFP, and not just because of new offensive coordinator Cam Cameron. I really thought things began clicking for the former Georgia signal-caller last year against Alabama when the Tigers almost beat the Crimson Tide. But the arrival of Cameron and the opening up of the playbook have worked wonders for the fifth-year senior, who has shown improvement at reading defenses, which has really piqued the interest of NFL scouts. He is completing 67 percent of his throws and has tossed just two interceptions. He also has put himself into the Heisman Trophy race. 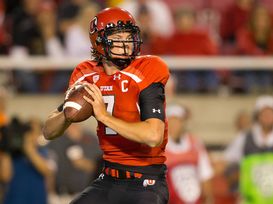 US PRESSWIRETravis Wilson and the Utes scored a huge upset of Stanford last Saturday.

Utah beating Stanford: Before the season began I thought that the Pac-12 winner would face Alabama in Pasadena for the final BCS national championship. And I thought that the Cardinal would come out of the West Coast league. While Stanford could still win the conference, it doesn't appear that a BCS title game is on the horizon. Kyle Whittingham has received very good play from quarterback Travis Wilson in the team's wins, but he has had trouble protecting the football in the team's losses. Wilson was very solid against Stanford's defense last week in the upset win in Salt Lake City, and receiver Dres Anderson has been his top target. While the Cardinal have not been as strong defensively this year as they were in 2012, Derek Mason's unit still should have taken care of business against the Utes. Perhaps it was a product of playing a week after a tough game against Washington and overlooking the Utes, but Stanford's loss last week really came out of nowhere.

The situations at USC and Texas: I never thought that the Trojans and the Longhorns would be able to get back to BCS bowl games this season. But I never thought that Lane Kiffin would get fired this early either, and I did not think that Mack Brown's situation in Austin would become so dire. The win over Oklahoma last week in Dallas definitely helps Brown, but will he be back in 2014 even if the 'Horns claim the Big 12? Meanwhile, Ed Orgeron will try to rally his Trojans to a strong finish. The results have been positive thus far after just one game, a win over Arizona last Thursday night. At least the team is playing loose and having fun again.

North Carolina: The Tar Heels entered this season as one of my choices to surprise in the ACC. I knew the defense had holes, but I thought that UNC would score plenty of points in Larry Fedora's second season in Chapel Hill. With quarterback Bryn Renner, receiver Quinshad Davis and tailbacks Romar Morris and A.J. Blue, the offense had plenty of weapons. The question was whether UNC would be strong enough along both lines, and it clearly hasn't been the case. The Heels gave up 55 points in a blowout loss to East Carolina, which helps explain why the defense is No. 95 nationally in scoring defense. And the rushing attack ranks No. 114 nationally in yards per game. This is a team that I thought was a legit Coastal division contender.

The Georgia defense: There's no question that the Bulldogs lost a ton of talent from last season's defensive unit, including linebackers Jarvis Jones and Alec Ogletree, defensive tackles John Jenkins and Kwame Geathers, safety Bacarri Rambo and cornerback Sanders Commings. In all, the ‘Dawgs lost 12 players on defense who started at least two games for them in 2012. But I talked to a few people familiar with the Bulldogs program who believed that coordinator Todd Grantham would thrive in more of a teaching role with so much inexperience and youth on that side of the football. Well, the 'Dawgs rank No. 105 nationally in scoring defense, and they can't get off of the field on third down. Quarterback Aaron Murray has really done all he could even with injuries decimating the offense. The team's defense has really been the reason for the two losses.

Virginia: Is Mike London occupying the hottest seat in America besides Eastern Michigan's Ron English? Quite possibly, as the Cavaliers have not been able to make a jump in the ACC after an encouraging 2011 campaign. This was a make-or-break season for London in Charlottesville as he entered with a pair of 4-8 records wrapped around the 8-5 mark in 2011. The ACC will welcome Louisville and partial member Notre Dame next year, so it will only get tougher. Class of 2014 stars Andrew Brown and Quin Blanding are currently committed to Virginia. But will London be there to coach them if they indeed head to Charlottesville? He is 18-25 overall, the team has lost three straight and the Cavs are not dynamic on either side of the ball.

Jadeveon Clowney: The Gamecocks defensive end was never a realistic Heisman Trophy contender despite having a large number of the media in his corner. But Clowney was supposed to have more of an impact on the Gamecocks' games this fall. And that just hasn't been the case. Clowney has two sacks and 13 tackles in five games played on the year, but the various ailments that he has encountered have derailed his season. And he has not exactly endeared himself to his coaches for both his play and some off the field comments and actions. Of course, offenses are running plays away from him, so his numbers have suffered. But a player of his caliber should be affecting a game more often.