The 2011-12 bowl season continues Wednesday with the Military Bowl between Air Force and Toledo at Washington's RFK Stadium.

The Falcons and the Rockets will bring prolific offenses into this game, but they go about finding the end zone in different fashions. 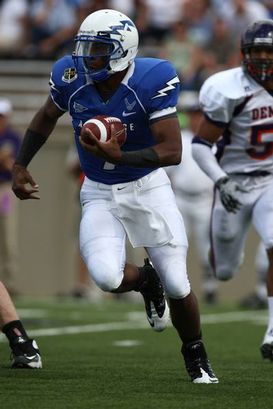 ICONTim Jefferson operates the nation's No. 2 rushing attack at over 320 yards per game.

Air Force rallied to win four of its final five games after suffering through a three-game losing streak to become bowl eligible for the fifth straight season. Once again, the offense is led by quarterback Tim Jefferson, who operates the nation's No. 2 rushing attack at over 320 yards per game. The triple-option attack also features Asher Clark, who has rushed for 1,096 yards and six touchdowns, and Mike DeWitt, who has found the end zone 10 times. Jefferson doesn't just rack up yards on the ground either, as he's thrown for 1,478 yards and 12 touchdowns on the season for Troy Calhoun's squad.

The defense, however, has suffered a rash of injuries. Linebacker Brady Amack is one of the top tacklers nationally, but the front seven will have its hands full against one of the best rushing teams in the country, especially because it allowed 321 rushing yards to a Colorado State team in the regular season finale that didn't run too effectively throughout the fall. In addition, the secondary will have to continue to tackle well because of the Rockets' explosive aerial attack. For the season, Air Force has allowed just 162.7 yards per game through the air.

Toledo, meanwhile, fought back from a 1-3 start to finish 8-4 for the second straight season under Tim Beckman, who left to replace Ron Zook at Illinois after three seasons with the school. That rough start included losses to Ohio State and Syracuse, but the Rockets were a 63-60 loss to Northern Illinois away from a spot in the MAC title game.

Offensively, Toledo is a juggernaut. And Beckman made the unit work with a two-quarterback system of Terrance Owens and Austin Dantin, and it kept defenses guessing with its no-huddle offense. The signal-callers work behind a veteran offensive line and have a deep corps of receivers to attack the Falcons secondary. And with the vertical game in sync, Adonis Thomas and the rushing attack add balance. Thomas has rushed for 963 yards and 11 touchdowns, averaging 6.5 yards per carry, and he finished the year with four straight 100-yard rushing games. Overall, the team's rushing attack ranks 14th nationally at 221 yards per game.

If you have yet to see Toledo play, you'll enjoy watching dynamic playmaker Eric Page, the receiver/returner who set the school record for receptions in a season with 112 and was named as a first-team All-MAC selection as a receiver, punt and kickoff returner.

Keep an eye on: The efficiency of the Toledo offense. Beckman may have departed, but the Toledo players will be excited to play for offensive coordinator/new head coach Matt Campbell. He has led this Rockets attack and will ensure that the program continues to trend in the right direction. Also, pay attention to the turnover battle. Toledo ranks third in the country in turnover margin.