The 2013-14 college football bowl season continues on Friday, as the Military Bowl takes place between Maryland and Marshall at Jack Stephens Field at Navy-Marine Corps Memorial Stadium in Annapolis.

Here are some things to keep an eye on when you're tuned into the contest between the Terrapins and the Thundering Herd.

Randy Edsall's Terps closed out the season strong with road wins over Virginia Tech and NC State despite being beat-up throughout the roster. Sure, the team started 4-0 and entered the AP poll before being blasted by Florida State, which began a stretch in which the Terps dropped four of five games. But winning two of their last three contests was a coup considering the depth issues that the Terps faced.

Meanwhile, Doc Holliday's team is looking to rebound from a loss to Rice in the C-USA title game and earn its first season with double-digit wins since 2002. And while tight ends such as Jace Amaro grab a lot of the headlines, Marshall's Gator Hoskins has found the end zone 13 times for Marshall, which is the most at the position in the NCAA.

Good news Brown: Terps quarterback C.J. Brown finished the season on a strong note after coming back from his injury suffered in the blowout loss to Florida State. He was particularly effective with his legs, as the dual-threat closed the regular season against NC State with five total touchdowns (three rushing and two passing), which no Terps quarterback had done since Scott McBrien when he had six in 2002. Brown has thrown 11 touchdown passes and run for 12 more scores despite missing two games with injuries. However, star receiver Stefon Diggs (broken leg) will be sorely missed if this game turns into a shootout with the high-powered Herd. 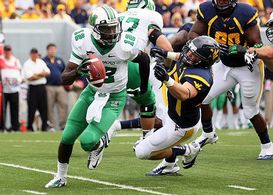 ICONRakeem Cato has passed for 3,579 yards and 36 touchdowns against just nine interceptions this year.

Marshall's explosive 'O': The Thundering Herd are an offensive juggernaut, led by quarterback Rakeem Cato, who has passed for 3,579 yards and 36 touchdowns against just nine interceptions this year. And his top weapon is all-league receiver Tommy Shuler, who has 97 catches for nearly 1,100 receiving yards and nine scores. Running back Essray Taliaferro (1,059 rushing yards and nine touchdowns) brings some balance when needed as well. But an offense that ranks seventh in the FBS in points per game will be challenged by a very good defense that features linebacker Marcus Whitfield (nine sacks and 14.5 tackles for loss) and defensive tackle Andre Monroe (8.5 sacks and 14 tackles for loss). Keep in mind that the Herd offense did struggle against Rice in the C-USA title game. It will be interesting to see how much the Terps go to five-plus defensive backs against Cato to contain the passing attack. A strong pass rush, which has been a strength for the Terps this year, would also help because the secondary is young.

Odds and ends: Marshall is favored by 2.5 points ... This is the first-ever meeting between the two programs ... Maryland's last trip to the Military Bowl in 2010 finished off a nine-win season. However, Ralph Friedgen was still fired after the game ... Cato has 88 career touchdown passes, which is just one fewer than former Marshall star Byron Leftwich ... This is Maryland's final game as a member of the ACC, as the Terps will move to the Big Ten in 2014 ... The Terps will be playing about 30 miles from their campus in College Park.