Although Braxton Miller ran the spread offense at his high school in Huber Heights, Ohio, the Ohio State quarterback is taking the advanced-level course in the offense under new head coach Urban Meyer.

While owning the perfect skill set to run the offense that helped Meyer win two national titles at Florida, Miller is in the beginning stages of absorbing the new scheme that the Buckeyes will run under the former Gators head coach and offensive coordinator Tom Herman. And Miller's development will take time, though spring practice is the first step in the process. 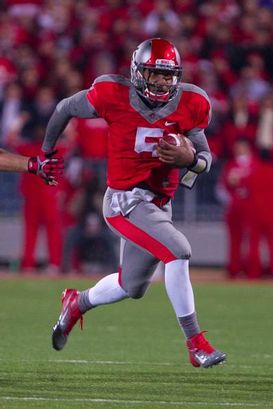 ICONBraxton Miller is the unquestioned leader of the Ohio State offense.

"Still got a long way to go," Herman told reporters after Saturday's workout when asked about Miller's progress thus far. "He makes mistakes just like everybody else in a brand-new system."

Prior to spring drills, Meyer told reporters that tempo would be the biggest adjustment for the Buckeyes, as he wants the pace of the offense to be at the high-octane level. Expect a no-huddle scheme with plenty of zone-read plays, so timing and rhythm can only improve with increased reps.

Grasping the terminology of the offense, as well as the increased pase, will be of premium importance during the team's 15 spring practices. And while it may be hard work for the dual-threat signal-caller, the crash course should eventually pay off because he has an abundance of talent and a strong work ethic.

Herman said working on his footwork and technique is also a priority this spring for Miller, who will run a unit that ranked 107th in the country in total offense last season. And while he was the Big Ten freshman of the year last fall, he attempted only 157 passes. So he's still raw at the position, and he'll need some playmakers to emerge around him to succeed. Miller also needs to become more of a vocal leader as well. But it's a process, and one that will take time.

There is a reason, however, why Meyer praised the QB when he was introduced as the new coach on Nov. 28 in Columbus. Miller, quite simply, represents the present and the future of this offense.

“I’ve got my first year under me, and I just want to keep working hard, progressing," Miller said. "Every time you step in the Woody [Hayes Athletic Center], you’ve got to take charge of your team, so that’s what I’m going to do.”