When Tim Brewster was introduced as head coach at Minnesota in 2007, he promised to bring the Golden Gophers back to the Rose Bowl.

After failing to make good on that lofty proclamation, Brewster was fired by the school Sunday, one day after the Golden Gophers lost to Purdue to fall to 1-6 on the year — their sixth straight defeat. 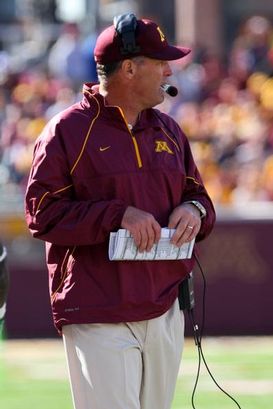 ICONTim Brewster is out as head coach at Minnesota.

Brewster, who was in his fourth season on the sideline, leaves after compiling a 15-30 record at Minnesota, including a 6-21 mark in the Big Ten. He was 0-10 in trophy games and never beat rivals Wisconsin or Iowa.

“Those that wear maroon and gold are disappointed, embarrassed, frustrated, angry and hurt by a 1-6 football team and the lack of being really competitive in the Big Ten for a long time,” athletic director Joel Maturi said.

After the future looked so bright with brand-new TCF Bank Stadium, Brewster became just another on a long list of head coaches who couldn’t elevate the Gophers’ program.

Brewster, who was hired without having ever been a head coach or coordinator in college or the NFL, will receive a $600,000 buyout. Offensive coordinator Jeff Horton will serve as interim head coach the remainder of the season. Horton was a head coach at Nevada in 1993 and UNLV from 1994-98.