Another night, another prime time matchup between the Big 12 and Pac-12 as Missouri visits Tempe to take on Arizona State.

Will the Sun Devils get rolled just like in-state rival Arizona was by Oklahoma State on Thursday night?

Let's take a look at three things to watch for in this contest. 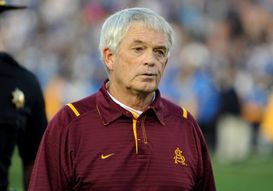 ICONWill Dennis Erickson's squad be able to close out games in 2011?

1. Meeting expectations: Arizona State last had a winning season in 2007, the year the Sun Devils went 10-3 in head coach Dennis Erickson's debut season. However, since then, Erickson has not been able to keep up the momentum in Tempe. Thus, 2011 is a make or break season for the veteran coach. ASU has lost its last 10 games against Top 25 opponents, but Erickson's squad has a chance Friday night at home to end that streak. Last season, the Sun Devils played hard against top opponents, including Wisconsin, Stanford, USC and Oregon. But they found ways to lose each contest. Can they reverse course and live up to their billing of Pac-12 South favorites? Against Mizzou, ASU has a chance to answer a lot of critics.

2. Which team is more wounded? Both squads come into this game with serious health issues. Missouri will be without seven projected starters, including stud offensive tackle Elvis Fisher and starting running back Kendial Lawrence, while Arizona State will be missing six, including shutdown cornerback Omar Bolden, running back Deantre Lewis and linebacker Brandon Magee. But ASU returns more starters, and some of their key injuries occurred earlier in the offseason so they had time to at least deal with the losses. ASU is the more athletic team, and the loss of Fisher could really hurt the Tigers against a fierce defense. I give the edge to the home team.

3. Franklin vs. Osweiler: Which new starting quarterback will be more efficient and turnover-free? Mizzou's James Franklin passed for just 129 yards with a touchdown and an interception against Miami (OH) last week in the season opener. He also ran for a score in the win. What ASU will want to do is load up on the run and force Franklin into third-and-long passing situations. The Sun Devils will also blitz with Vontaze Burfict, who had three sacks in the opener last week against UC Davis. Keep an eye on end Junior Onyeali, as well. Meanwhile, Sun Devils signal-caller Brock Osweiler started his 2011 season in fine fashion, throwing for 262 yards with two touchdowns against one interception. The Tigers have become much improved defensively under Gary Pinkel, and this team gave quarterbacks fits last season -- including Oklahoma's Landry Jones. Expect a healthy dose of running back Cameron Marshall so that Osweiler could pick his spots and take shots down the field.