Yet another quarterback at the FBS level is taking advantage of the NCAA rule that allows graduated players to transfer and play immediately at another school. 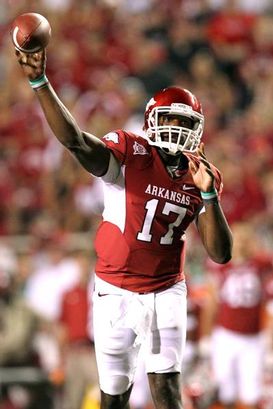 US PRESSWIREBrandon Mitchell is leaving Arkansas after failing to earn the starting QB job.

Arkansas announced on Monday that senior quarterback Brandon Mitchell is transferring after sophomore Brandon Allen was listed as the first-team signal-caller on the post-spring depth chart. Allen was 11 of 16 passing for 158 yards and a touchdown in the Razorbacks' spring game, and he will now try to replace prolific signal-caller and Oakland Raiders draft pick Tyler Wilson. He was 21 of 49 passing for 186 yards in limited action last year but has picked up new offensive coordinator Jim Chaney's scheme very well this offseason.

Meanwhile, Mitchell can play immediately at another school this fall after he graduates from Arkansas. The 6-4, 230-pounder went 12 of 17 passing for 138 yards in the spring game, but he threw an interception in the red zone and nearly threw another earlier in the contest. New head coach Bret Bielema may have been leaning toward using Mitchell more as a wide receiver in the fall, something that may not have sat well with the senior.

Mitchell served as Wilson's backup two seasons ago, finishing 22 of 32 for 271 yards. He moved to wide receiver last year to get more playing time but moved back to quarterback after Bielema arrived.