MLB pitcher not the biggest fan of Vick

It's safe to say that Chicago White Sox pitcher Mark Buehrle will not be congratulating Philadelphia Eagles quarterback Michael Vick on his NFL Comeback Player of the Year Award. 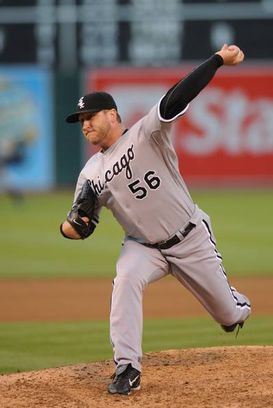 The baseball player and wife Jamie are such huge dog advocates that they founded a "Sox for Strays" program to support animal rescue groups. And in an interview with MLB.com, the topic of Vick came up. And it was clear that Buehrle wasn't ready to forgive the former Atlanta Falcon for his dog fighting history.

"Even if you are not a dog lover, how can you sit there and make two dogs fight and one is going to die?" Buehrle said. "How could you do that if you are somewhat sane?

Now those quotes, as well as a few comments by his wife, have since been removed from the MLB.com story after they started circulating around the Internet and getting mainstream pub. However, they do remain in the Chicago Tribune's report.