And as I wrote this offseason after spring practice, it was a move that was necessary for the Bruins.

Throughout the Rick Neuheisel era, there was an annual quarterback controversy in Westwood. And most of it stemmed from ineffectiveness and injury to whoever had the starting job. It was the one position that the former leader of the Bruins could not fortify during his tenure — the same one that he played while helping UCLA to the Rose Bowl in 1983. 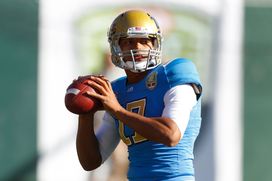 US PRESSWIREBrett Hundley was named the new starting QB at UCLA.

While we ultimately will need to see how Hundley fares beginning in Week 1 at Rice, UCLA fans have seen what veteran signal-callers Kevin Prince and Richard Brehaut have offered. While the pair has shown flashes of being capable starters, neither one could stay healthy and bring consistency to the position the last few years. And as disappointing as the defense has played, the offense never gave the team a chance to win consistently.

Hundley is the future at the position, and it's a smart move by Mora and offensive coordinator Noel Mazzone to start the process of breaking him in sooner rather than later.

Because the move was made early in camp, Hundley will get plenty of reps leading the first-string offense heading into the season opener. The dual-threat has had his moments of impressive play along with a good command of the new offense throughout the offseason, but there remains a huge learning curve. Poor throws and bad decisions are part of the process. But for Mora to put his stamp on this team and for the new offense to work, the athletic dual-threat Hundley deserves the chance to work through any inconsistency and live up to the hype that has surrounded him since his arrival in Westwood.

Mistakes will be made. But Hundley's ceiling is high, and he needs live game action to improve at the position. And this offense would remain stagnant with Prince or Brehaut taking the snaps.

There's a new face of the UCLA offense, and Bruin fans have every reason to be excited about the team's future.