Mora should turn UCLA offense over to Hundley

Rick Neuheisel is no longer the head coach at UCLA, but there is still a quarterback controversy in Westwood.

The one position that the former leader of the Bruins could not fortify during his tenure was the same one that he played while helping UCLA to the Rose Bowl in 1983. No matter who was under center during Neuheisel's tenure, stability was fleeting.

And for new head coach Jim L. Mora, that must be remedied if he has any designs on success in his first season as the new face of the Bruins. 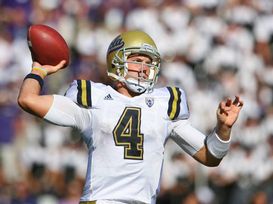 ICONKevin Prince has not been able to stay healthy when holding the starting QB job.

Kevin Prince and Richard Brehaut never could stay healthy and bring consistency to the position the last few years, and the inept offense under coordinators Norm Chow and Mike Johnson is one of the big reasons why athletic director Dan Guerrero made a change at head coach.

As disappointing as the defense played, the offense never gave the team a chance to win consistently.

Prince and Brehaut remain in Westwood and are options to start the season opener, but Brett Hundley is the future at the position.

And it's time that Mora and new offensive coordinator Noel Mazzone make him No. 1 on the depth chart sooner rather than later.

Mora recently told local reporters that he doesn't want to wait too long to name a starter, which is smart because the first-string offense needs plenty of reps together leading up to the opener. However, it is unclear when Mora is prepared to name a No. 1.

It would appear that Hundley is a little behind Prince and Brehaut in the race because he only threw one pass in Saturday's scrimmage -- an interception. But one toss is a disappointing number for a player who is eager to prove himself, especially under a new staff and after the struggles of Prince and Brehaut the last few seasons. While the pair of veterans had more opportunities and played well at times Saturday, they threw passes late in the scrimmage that were intercepted.

Each signal-caller has had his moments of impressive play along with a good command of the new offense. But each has been plagued with poor throws and bad decisions as well. The inconsistency is still there for each one, but the fact that Prince and Brehaut have yet to move past Hundley says a lot about their lack of star power. With Hundley, mistakes will be made. But his ceiling is very high, and he needs live game action to improve at the position. Quite frankly, this offense may not grow with Prince or Brehaut taking snaps.

Mora said that he planned to watch film of the weekend scrimmage and expects to see some separation in the final practices of the spring.

"I would love for the sake of the team to come out spring feeling like we had a guy, but I never felt that would be an absolute," Mora said.

Mora said he intends to put all three quarterbacks in more difficult situations over the final days of spring drills so he can see who bests handles the pressure. So this is a big week for Hundley, who is eager to become the new face of the UCLA offense.

It would be surprising if Mora named a starter after spring drills. It's more likely that he would have an idea of who is No. 1 entering camp and name a starter shortly thereafter in August. Whoever is the choice, Mora has stated that he will stick with whoever he chooses and ride with him throughout the season.

Based on what we've seen last season from Prince and Brehaut, Hundley should be that guy.