The Lane Kiffin reign may have lasted just one season in Knoxville, but the current USC head coach is still causing problems on Rocky Top.

Additional penalties were announced by the NCAA and Tennessee on Friday for violations that were committed by former assistant Willie Mack Garza, who paid for a recruit's unofficial visit in 2009 and subsequently misled the governing body's enforcement when probed about the action. 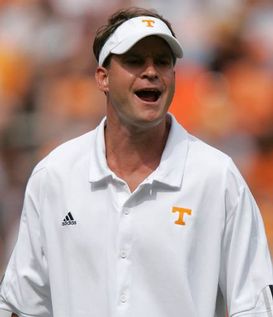 Lane Kiffin spent one season as Tennessee's head coach before bolting to USC.

After Tennessee met with the NCAA Committee on Infractions at a hearing on Tuesday, the additional penalties were announced on Friday. They include the Vols' probation being extended by two years, a reduction in the number of official visits for the 2012-13 academic year and a reduction in evaluation days for the coaches. The school will also be unable to provide free tickets to recruits for the first two SEC games in 2013.

"We will finally close the chapter on the prior actions of members of a previous football coaching staff," athletic director Dave Hart said in a release. "We have significantly strengthened our culture of compliance at Tennessee and will continue to do so. We disagree with additional penalties fora matter we believed should have been part of the previous case. We will now move forward."

The most notable aspect of these violations by Garza is the fact that his payments were to Willie Lyles, the same figure involved in the NCAA's case against Oregon in which Ducks head coach Chip Kelly allegedly paid Lyles for bogus scouting data. The NCAA has yet to make a ruling on that case. Meanwhile, Oregon is positioned to play in the BCS national championship game.

Certainly, though, it's never a dull day in Knoxville, where the Vols currently sit at 4-6 and winless in SEC play, which could mean that Derek Dooley's days as head coach are numbered.