Week 2 is in the books, and all eyes are now on the third week of the season after an exciting start to the 2012 college football campaign.

While many expected teams such as Alabama, Oregon and Oklahoma to be 2-0, the following teams have been pleasant surprises to their fan bases. The question now is whether they can keep their undefeated marks going for at least another week. 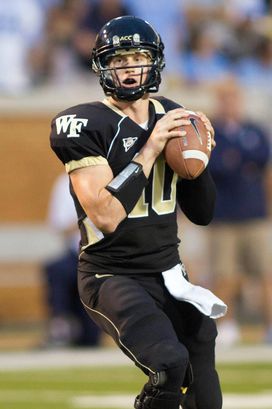 US PRESSWIRECan Tanner Price and the Demon Deacons knock off the Seminoles in Tallahassee?

Wake Forest: The Demon Deacons are always a tough "out" under Jim Grobe, one of the most underrated coaches in America. But North Carolina was generating a lot of hype in Larry Fedora's first season in Chapel Hill despite NCAA sanctions, so beating the Tar Heels behind Tanner Price's heroics continued a nice start to the season for Wake last week. Can this team go into Tallahassee and steal a win from Florida State this weekend? It would seem unlikely because of the Seminoles' dominant defense as well as the fact that FSU will be looking for revenge for its loss last year in Winston-Salem.

Maryland: There's no question that Randy Edsall badly needed to get off to a strong start this fall after last year's disaster. After a poor opener against William & Mary, the Terps looked good last week against Temple despite almost giving the game away. It's still hard to see more than 5 wins on this schedule, but the Terps could continue to gain momentum if they can slip by defensive-minded UConn at home this week. Sitting at 3-0 would be very satisfying to Maryland fans, especially because a road trip to Morgantown to face high-powered West Virginia follows the next week. That's almost certainly a loss, so finding a way to take care of business at home this weekend is vital.

Arizona: Rich Rodriguez continues to prove that his spread offense can be awfully difficult to contain when the right quarterback is in place. Dual-threat Matt Scott is a perfect fit for this scheme, and coordinator Jeff Casteel's defense was able to force four Oklahoma State turnovers in a defining early-season victory this past weekend. The Wildcats should have no problem moving to 3-0 this week at home against South Carolina State, but then the real test for Rich Rod's bunch comes on the road in Week 4 against Oregon. High-octane offense vs. high-octane offense.

Arizona State: The Sun Devils caught a bit of a break by not having to face Illinois starting quarterback Nathan Scheelhaase, who missed the game against the Sun Devils due to injury. But there is no denying the effectiveness of Todd Graham's spread as ASU had no trouble with the Illini defense, which is the strength of Tim Beckman's squad. Taylor Kelly looks awfully good running this offense, and backup Michael Eubank has impressed as well as a variety of skill players have been a key to the team's early-season success. A huge test awaits in Columbia this weekend, though, as Missouri will be looking to put behind its setback against Georgia last week. The Tigers will be looking for revenge from their overtime loss in Tempe last fall.

UCLA: The Bruins are lighting up scoreboards behind the running and passing of dual-threat quarterback Brett Hundley and the legs of star tailback Johnathan Franklin. They have topped 640 yards of offense in each of their first two games under new offensive coordinator Noel Mazzone, who was one of the most underrated assistant hires this past offseason. But it's the defense that has been a real surprise for Jim L. Mora, who is riding high early in his career as Bruins head coach. End Datone Jones is pacing a unit that has almost as many sacks as they had last year, when the Bruins recorded just 14. A home game with Houston awaits followed by a contest with Oregon State at the Rose Bowl. Expect the momentum to continue to build in Westwood.

Iowa State: The Cyclones beat Iowa on the road for the first time in 10 years. And it's become expected that head coach Paul Rhoads is good for at least one signature win per season. Steele Jantz is a solid leader at quarterback for a scrappy football team, but the Cyclones can't afford to turn the ball over. Logging as many nonconference wins as possible is always a priority with a tough league slate on deck. A win over Western Illinois this week would be a nice way to enter the bye week. Then, Texas Tech travels to Ames for the Big 12 opener.

Northwestern: After a wild road victory over Syracuse to open the season, the Wildcats took care of business this past week against Vanderbilt under the lights at Ryan Field. The next three weeks don't look especially daunting for the 'Cats, as they host Boston College, South Dakota and Indiana. However, BC quarterback Chase Rettig could give the NU secondary fits. But a 5-0 start is not out of the question heading into a road tilt at Penn State. We know Pat Fitzgerald's team will always be efficient and prolific on offense. Defensively has been the main concern, so we'll see if the 'Cats can continue to improve after an impressive performance against the Commodores.

Utah State: The Aggies were able to snag a wild, 27-20 overtime victory over Utah last Friday night, putting an end to a 12-game losing streak to the in-state rival Utes. Sophomore dual-threat quarterback Chuckie Keeton is one of the more under-the-radar exciting players in the nation. Keep in mind he almost led Utah State to a victory at Auburn in the season opener in 2011. The problem is that road trips to Wisconsin and Colorado State loom. And the Badgers will be salty after losing to Oregon State.