The 2011-12 bowl season continues Friday with the Music City Bowl between Mississippi State and Wake Forest in Nashville.

The Bulldogs are making their first trip to the Music City Bowl and will look to win their fifth straight bowl game, while the Demon Deacons are returning to the postseason after missing it the last two years. 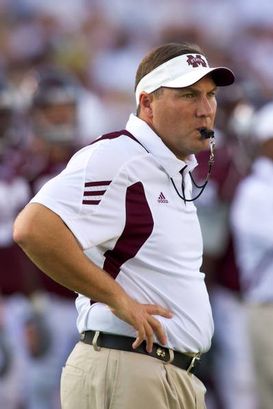 ICONDan Mullen's Bulldogs didn't have the year that many expected in his third season as head coach.

Mississippi State didn't live up to its high expecations this fall coming off of its first nine-win season since 1999. The frustrating part for third-year coach Dan Mullen is the fact that the offense was supposed to be the strength of the squad, with returning veteran quarterback Chris Relf and productive running back Vick Ballard. But after averaging nearly 600 yards and over 45 points in the first two contests, this unit became ineffective as injuries along the offensive line piled up. Tyler Russell took over for Relf but wasn't able to separate himself, and receiver Chad Bumphis led a corps that was capable of making plays, but the instability at the quarterback position limited their effectiveness. Things won't get any easier against the Demon Deacons, as freshman cornerback Merrill Noel leads the nation with 20 passes defended.

The bright spot for the Bulldogs was the play of the defense despite losing rising coordinator Manny Diaz to Texas. Mississippi State's defense played very well despite losing productive linebackers K.J. Wright and Chris White to the next level, allowing only two teams to score more than 24 points on them all season.

Wake Forest, meanwhile, will be looking to close the season on a high note after losing four of its final five games. Still, bouncing back from last season's 3-9 mark was huge for head coach Jim Grobe, who will be making his fifth bowl appearance in 11 years, and the team was in the ACC Atlantic division race before stumbling down the stretch.

Quarterback Tanner Price really stepped up his game this fall, as the sophomore threw for 2,803 yards with 20 touchdowns and only six interceptions. He helped stabilize the offense and was able to take advantage of skilled receivers Chris Givens, who led the ACC with 1,276 yards receiving, and Michael Campanaro, who had 63 catches in the slot. The Demon Deacons rank 96th in the nation on the ground, however. So it will be difficult if they are made into a one-dimensional offense by a stout Bulldogs defense.

Keep an eye on: The Mississippi State ground game. In his senior season, Ballard rushed for 1,009 yards and eight scores, and LaDarius Perkins serves as a nice complementary piece. Wake Forest has issues stopping the run, giving up over 220 yards per game in its final five contests.