Let's take a look at some of the most important aspects of this matchup between the Wolfpack and the Commodores. 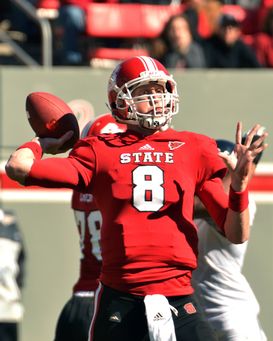 US PRESSWIREMike Glennon will try to give interim head coach Dana Bible a win over Vandy.

• Another interim situation: N.C. State is one of 10 bowl teams that has dealt with having an interim head coach during bowl prep, as Tom O'Brien was dismissed and Dave Doeren was brought in from Northern Illinois. O'Brien was let go after a 7-5 season, so offensive coordinator Dana Bible will coach the bowl game. Inconsistency plagued O'Brien during his tenure, including this fall when the Wolfpack were able to beat Florida State, yet they also were plastered 33-6 by Virginia. Senior quarterback Mike Glennon will try to put on one last good show for NFL scouts after passing for 3,648 yards this fall. But the defense arguably is the reason why O'Brien is no longer in Raleigh. The Wolfpack finished 79th in the FBS in total defense, and they didn't exactly play a lot of explosive offenses in the ACC.

• They're streaking: Vanderbilt, which will be playing close to home, enters this contest on a six-game winning streak, although the 'Dores didn't exactly beat a standout program with the exception of fellow bowl team Ole Miss. Their four losses were to South Carolina, Northwestern, Georgia and Florida. Still, James Franklin has taken the school to a second consecutive bowl game. And that's impressive, as the Commodores posted their first eight-win regular season since 1955 and their first winning SEC record since 1982. Vanderbilt leans on its defense, which is ranked No. 17 in total defense and No. 15 in scoring defense. Offensively, senior quarterback Jordan Rodgers has thrown two touchdowns in each of his final five regular-season contests, while senior running back Zac Stacy went over the 1,000-yard rushing mark for the second straight season. Vandy has a run-first offense, but the play of Rodgers is a big factor in the team's success. Jordan Matthews, who set a school record with 1,262 yards, and Chris Boyd, who recorded 756 yards, lead the receiving corps.

• Quarterback play: It's hard to imagine the winner of this game not getting steady play from the quarterback position, just because we have seen both offenses stall when the play under center is underwhelming. Vanderbilt possesses the 10th-ranked passing defense in the country, while Glennon and the Wolfpack have the nation's 20th-ranked passing offense. Vandy was able to contain Tennessee's aerial attack, led by quarterback Tyler Bray and his talented receivers, so the 'Dores should be confident going up against another future NFL quarterback. Meanwhile, N.C. State's pass defense has struggled, particularly corner David Amerson, who was projected to be a high first-round draft pick entering the season. Rodgers isn't the most accurate of quarterbacks, but he's steady so long as he protects the football. And expect Vandy to once again rely heavily on the ground game to help out its QB.