Tom O'Brien has been dismissed as head coach at N.C. State.

The former Boston College head coach led the Wolfpack to bowl games in three straight seasons and four of the last five campaigns, but the school announced Sunday that he will not return for a seventh year. 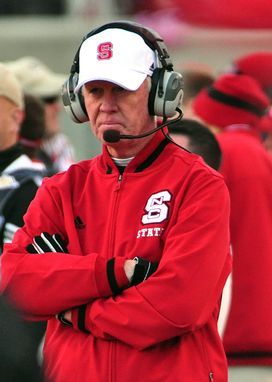 US PRESSWIRETom O'Brien will not get a seventh season in Raleigh.

O'Brien recorded a 40-35 mark in six seasons with a 22-26 record in ACC play. With his contract going through December 2015, he will be paid over $1 million over the next three years.

N.C. State sits at 7-5 after beating Boston College this weekend, so the Wolfpack will be led by an interim head coach in the team's bowl game.

It will be interesting to see who athletic director Debbie Yow targets for the opening in Raleigh, but an early name to consider is Vanderbilt's James Franklin, who was hired by Yow to succeed Ralph Friedgen at Maryland. Of course, Franklin never received his chance to coach the Terps. But he has done wonders at Vandy, especially on the recruiting front, which is an area that O'Brien struggled in at N.C. State.

Franklin has won 14 games in two seasons with the Commodores, including taking the program to two straight bowl games.

Perhaps Yow feels that she can get Franklin because dismissing a head coach who is one of two coaches in school history to beat North Carolina five straight times is a bit peculiar. While many people I've talked to in the past believe N.C. State is a bit of a sleeping giant, O'Brien did go 24-14 since the start of the 2010 season, which is one of the most successful runs in school history.

Perhaps heartbreaking losses this fall to Miami (FL) and North Carolina were the nails in the coffin for the 64-year-old O'Brien as well as a terrible home loss to Virginia. Despite the Wolfpack knocking off Florida State, 2012 was another year of inconsistency in Raleigh. Wins over the Hurricanes and Cavaliers alone would have given the Wolfpack nine victories, which would have assured O'Brien's return in 2013.

And now, Yow hopes to change that inconsistency with her new hire.