North Carolina’s secondary will continue to be depleted, as the NCAA denied the appeals of safety Deunta Williams and cornerback Kendric Burney Friday afternoon. 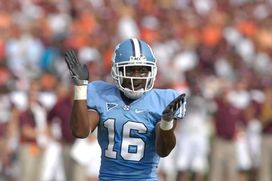 ICONKendric Burney is eligible to return to the Tar Heels lineup Oct. 23.

According to a press release issued by the university, the NCAA has upheld the original suspensions — Williams was given four games while Burney was handed a six-game hiatus — announced on September 22. The Tar Heels players were found to have committed violations of the NCAA agent benefits and preferential treatment rules.

“I am disappointed for Deunta and Kendric, but I respect the NCAA's decision,” athletic director Dick Baddour said in a statement. “I appreciate the committee allowing us the opportunity to present their case.”

Williams will be eligible to return Oct. 9 against Clemson, while Burney can come back for the Miami game Oct. 23.