Lo Wood, who was projected to be one of Notre Dame's starting cornerbacks this fall, suffered a season-ending Achilles injury on Monday and will have surgery later this week, according to Pete Sampson of IrishIllustrated.com. 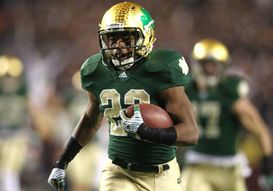 The loss of Lo Wood to injury is a tough blow for the Notre Dame defense.

The injury is a brutal blow to a Fighting Irish defense that is replacing both starting cornerbacks from 2011. Wood was a near-lock to start this year after taking first-team snaps during camp, and his play has stood out in preseason drills.

Head coach Brian Kelly and defensive coordinator Bob Diaco may be forced to move safety Jamoris Slaughter to cornerback unless they believe that someone from the trio of Jalen Brown, KeiVarae Russell and Josh Atkinson can step up and fill the void. Cam McDaniel, who is a running back, worked at CB until last week before moving back. Could he return to the defensive side of the ball? Meanwhile, Bennett Jackson is expected to take the other starting cornerback spot.

Keep in mind that cornerback is a thin area on the team's depth chart, especially after losing the commitment of top corner Ronald Darby to Florida State as well as highly ranked corner Tee Shepard, who left campus in February after being an early enrollee.