Nebraska's 'T-Magic' must make plays through the air

It's quite simple, really.

In order for Nebraska to win its Big Ten debut Saturday night in Madison against Wisconsin, the Cornhuskers will need to have a balanced offensive attack. Which means quarterback Taylor Martinez, who has struggled to consistently get the ball down the field with accuracy in his career, must be able to make plays in the vertical passing game. 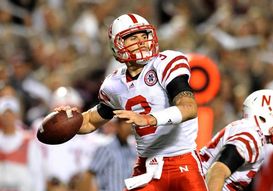 ICONTaylor Martinez will need to make some plays through the air in Madison against the Badgers.

Throughout the offseason, new coordinator Tim Beck has promised a more balanced offensive attack for the Huskers. But through four games, the team has relied more on the legs of Martinez and running back Rex Burkhead.

Some have wondered whether Martinez's unconventional throwing motion makes it difficult for him to get the ball to his playmakers consistently. Still, others wonder whether the Huskers have enough playmakers or whether Beck is being too conservative in his play-calling -- an all-too-familiar approach in Lincoln.

While Quincy Enunwa and Jamal Turner are talented receivers, their inexperience is still a concern. Meanwhile, senior receiver Brandon Kinnie is solid but not explosive, and tight end Kyler Reed has only five catches on the year. Reed's ability to find the open field against the Wisconsin defense on Saturday could be key for the Huskers because he presents matchup problems.

But while Martinez has thrown for 647 yards through the air and four touchdowns, he has completed just 50 percent of his passes while tossing two interceptions. And he just went above the 50 percent mark for the first time in a single game in 2011 this past week at Wyoming when he completed 57 percent of his throws. On the ground, he has rushed 63 times for 421 yards and seven touchdowns while getting solid production from backfield mate Burkhead.

Similarly, Michigan's Denard Robinson was supposed to spend more time in the pocket and less time on the run this season, but the Wolverines dual-threat signal-caller is doing what he does best: making plays with his legs. "T-Magic" has been doing that this fall, as well, but Saturday night in Madison the Badgers likely will load the box and force Martinez to make plays through the air.

Will Beck dial up the right play calls? And, more importantly, will Martinez's quirky throwing motion be able to deliver consistently enough to make Nebraska successful in the Big Ten's biggest game in quite some time?

Wisconsin may not have been put to the test defensively yet, but it's still hard to overlook a unit that ranks seventh in the country in total defense and only gives up an average of 8.5 points per game. While Northern Illinois is from the MAC, the Huskies have one of the finer offenses in that league yet was shut down by the Badgers at Soldier Field in Chicago two weeks ago.

Will "T-Magic" and the Huskers suffer a similar fate?