The 2013-14 college football bowl season kicks off on Saturday with four games, starting with the New Mexico Bowl between Colorado State and Washington State in Albuquerque.

Here are some things to keep an eye on when you're tuned into the contest between the Rams and the Cougars.

Colorado State improved over the course of the season and actually trailed Alabama by a mere 11 points heading into the fourth quarter on the road in September before succumbing to the Crimson Tide. Behind stud running back Kapri Bibbs, who has rushed for 1,572 yards and 28 touchdowns, the Rams became bowl-eligible for the first time under former Alabama offensive coordinator Jim McElwain.

Meanwhile, Wazzu fast-tracked the demise of the Lane Kiffin era at USC by notching a shocking 10-7 win over the Trojans at the Coliseum in Week 2. However, Mike Leach's squad would be blown out by Stanford, Oregon State, Oregon and Arizona State. However, a late road win against Arizona allowed Leach to get Wazzu back to the postseason in his second season in Pullman. And don't forget this team only lost at Auburn by seven points in the season opener, although both teams were much different outfits by the end of the regular season. This is Wazzu's first bowl game since it played Texas in the 2003 Holiday Bowl. 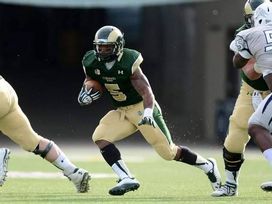 Kapri Bibbs has rushed for 1,572 yards and 28 touchdowns this season.

Feed Bibbs: The Rams redshirt sophomore running back has seven games with at least three touchdowns (including one with six scores) and two games with at least 290 yards this season, and there's a good chance that this is the first time the average college football fan will see him in action. The 5-11, 203-pound Illinois native had a big day at University Stadium already this season, rushing for 291 yards and six touchdowns in a win over New Mexico in November. Expect a heavy dose of Bibbs in this one because the Cougars rank 80th in the country in rushing defense.

Halliday's turnover issues: Cougars quarterback Connor Halliday has struggled with turnovers throughout the season, as he has thrown 14 interceptions in the team's losses and 21 picks total. The 6-4, 190-pounder, though, will still move the football in this productive aerial attack, as Wazzu ranks No. 4 in the country in passing yards per game. The Rams are susceptible through the air, so the Cougars will be in good shape — if Halliday is able to protect the football. That's a big "if."

Odds and ends: Washington State is favored by 4.5 points ... This will be the first meeting between the Rams and the Cougars ... The Rams are the only team in the country to have a 3,000-yard passer and a 1,500-yard rusher ... The Cougars are looking for their first seven-win season since 2003 ... CSU set a school record this season for the most total offensive yards (5,996) ... Wazzu's Halliday has the school-record of most career 300-yard efforts (13).