The most sacred of days in college football is upon us.

And although the BCS national championship game is still six days away (and that's not the only game left on the 2012-13 slate), New Year's Day as always offers up a full day of action.

So let's break down the full lineup of games...

Badgers running back Montee Ball started to resemble his 2011 self after a trying first month of the season. The former Heisman Trophy finalist didn't seem to be running with the same burst or mentality, and it very likely could have been related to his injury suffered when he was jumped during the offseason. But as we saw in the Big Ten title game against Nebraska, Ball is his old self again after averaging less than 100 yards per game in his first four contests. And so is an offensive line that is being overseen by a new coach after Bret Bielema made a change at the position. So the Badgers unquestionably have their power run game clicking on all cylinders, with Ball averaging over 150 yards per contest in the final nine games. And the offense faced some tough run defenses during that stretch. 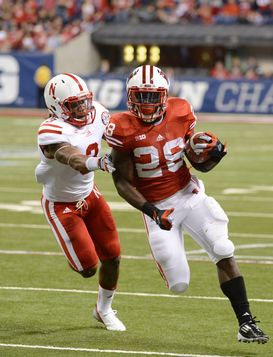 US PRESSWIREMontee Ball was back to his old self when it counted for Wisconsin.

The problem is that Wisconsin will be facing a Stanford front seven that thrives on containing downhill rushing attacks. Two teams had success running the football against the Cardinal this fall: Oregon and UCLA (for the Bruins, it happened in the Pac-12 title game). Both teams went over the 170-yard mark against the Cardinal. And they were able to move the football on the ground because those offenses spread out the Cardinal defenders, using multiple-receiver sets to disperse the Cardinal front seven across the field so there would not be seven defenders in the box. Using motion and the option to move defenders and threaten the perimeter is key against Stanford.

But that's problematic for the Badgers because their offense just doesn't stray away from what they do best — and that's run from more traditional sets. The best way to move the ball against the Cardinal would be for Wisconsin to complement its power run game with either a vertical passing game or by horizontally spreading them out with the option. And the Badgers just don't run that type of offense, which is to the benefit of Derek Mason's unit.

Both teams are coming off of brutal losses in their last games — but for much different reasons. The Bulldogs fell to Alabama in an SEC Championship Game heartbreaker, which denied Mark Richt's squad a chance to play Notre Dame for the BCS national championship. The Cornhuskers, meanwhile, were obliterated by Wisconsin in the Big Ten Championship Game. So the question is will either team be motivated for this one?

Even if the Bulldogs' defense reverts back to their underachieving ways and plays as poorly as they did against South Carolina early in the season, they still might be able to slip by a Nebraska team that has turned the football over 32 times, which is more than just five FBS teams. Bo Pelini's squad lost 21 fumbles this season, and dual-threat quarterback Taylor Martinez has gotten off to rough starts in games this year. However, I have been impressed with the way "T-Magic" has developed as a passer and the way he has led his team to second-half comebacks. I just think it will be awfully difficult to do so in this one if the Huskers fall behind. And it could happen because Georgia ranks 22nd nationally in turnovers forced with 27. All-America linebacker Jarvis Jones alone has forced seven fumbles on the year.

Even if the Huskers protect the football, stopping Bulldogs offensive stars Aaron Murray, Todd Gurley and Co. from marching down the field will be a difficult chore. Nebraska does not exactly boast a strong pass rush, and Murray ranks second nationally in pass efficiency and has tossed just eight interceptions this year. Senior defensive end Eric Martin, who is the team's best pass rusher, might need to be a one-man show for the Huskers to have a chance.