The Rose Bowl and Sugar Bowl games featuring Oregon-Florida State and Alabama-Ohio State, respectively, take place on the first day of 2015, with the winners of those contests meeting on January 12 in Arlington for the brand-new CFP national championship trophy.

Let's break down the marquee games on today's slate... 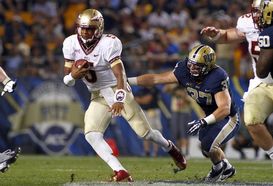 Jameis Winston has never lost a game as a collegiate starting quarterback.

The very first College Football Playoff kicks off with the Rose Bowl between the Ducks and the Seminoles in a matchup that features two Heisman Trophy-winning quarterbacks. The Ducks, favored by 9 points, face a Seminoles team that has played with fire all season but has found a way to go through the year unscathed, using six second-half comebacks to remain the nation's only undefeated team and avoid its first loss since the regular-season finale versus Florida in 2012. The matchup to watch could be Ducks cornerback Troy Hill against Seminoles receiver Rashad Greene. Mark Helfrich's squad will be without injured All-America cornerback Ifo Ekpre-Olomu, so Greene will likely see a ton of matchups against Hill, who has 16 pass breakups this season. Hill is very good, but this is certainly a weakened secondary, as redshirt freshman Chris Seisay steps in for Ekpre-Olomu. Not a good thing against Jameis Winston, who still has elite talent despite not looking as sharp in 2014 as he did last season. Greene, who was a second-team AP All-America selection, has 264 career catches and 3,771 career receiving yards while playing for Jimbo Fisher. This fall he caught a school-record 93 receptions, and he'll get offensive help from tailback Karlos Williams, who returns after missing the ACC title game win over Georgia Tech with a concussion. Defensively, the 'Noles have been prone to big plays down the middle of the field, so expect Ducks quarterback Marcus Mariota, who has 38 passing touchdowns and 14 rushing scores, to exploit that area of the field.

College football fans finally get to see Nick Saban match wits once again with Urban Meyer, perhaps the two best coaches in the country. Of course, the two are very familiar with one another from their time together on opposing SEC sidelines. One of the key matchups to watch is Alabama offensive tackles Cam Robinson and Austin Shepherd going up against Ohio State defensive end Joey Bosa, who earned first-team All-America honors after registering 13.5 sacks and 20 tackles for loss this season. He could rotate and match up against either tackle and cause problems for the Crimson Tide. But left tackle Robinson has played well in his true freshman season, and right tackle Shepherd has allowed only two sacks in his entire career. The Tide have given up the least amount of sacks in the SEC, so generating pressure may be tough for the Buckeyes. But Bosa and that front seven can be disruptive, so quarterback Blake Sims may have to use his legs to buy time when he's looking downfield for star receiver Amari Cooper, who is poised to be one of the top NFL Draft picks in the spring after breaking Jordan Matthews' SEC record with 115 catches this season. Defensively, the Crimson Tide will try to slow down Buckeyes quarterback Cardale Jones, who may have been No. 3 on the depth chart when preseason camp began but emerged in the Big Ten title game with three touchdown passes against Wisconsin as he filled in for J.T. Barrett, who was in the Heisman Trophy conversation after being a stellar fill-in for Braxton Miller.

This may be the most appealing bowl game outside of the College Football Playoff. While the Spartans did not have quite the dominant defense this season as they had in 2013, it is still a strength of the team that will be challenged by a Bears squad that leads the nation in scoring at 48.8 points per game. Secondary coach Harlon Barnett and linebackers coach Mike Tressel were promoted to co-defensive coordinator when Pat Narduzzi assumed head-coaching duties at Pitt (though Narduzzi will coach one final game with MSU), and it will be a chore to stop Bears quarterback Bryce Petty, who averaged over 430 passing yards in the team's three games against ranked opponents this season. One matchup to watch is Bears receiver Corey Coleman against Sparty cornerback Trae Waynes. Coleman has 57 receptions for 969 yards and 10 touchdowns (and he actually missed three games with a hamstring injury), but Waynes has three interceptions and seven pass breakups this season.