Of course, these rankings are definitely subject to change as players will commit and decommit before National Signing Day, which is on February 6.

1. Alabama: The rich get richer, as the Crimson Tide recently added defensive end Tim Williams, who is the top player from Louisiana. He's joined by fellow end Jonathan Allen in a loaded defensive class. But the Tide also have commits from receiver Robert Foster, running backs Tyren Jones and Altee Tenpenny as well as freakish athlete Derrick Henry. Yet another strong recruiting cycle for Nick Saban and his staff.

2. Florida: The Gators have 27 commitments, highlighted by defensive back Vernon Hargreaves III. But Will Muschamp is looking to add more offensive playmakers, and running back Kelvin Taylor, who is the state of Florida's all-time leading rusher, and five solid wide receiver commits lead the way.

3. Notre Dame: The Fighting Irish won't officially be "back" until they can have sustained success, and that begins on the recruiting trail. Brian Kelly's haul is led by outside linebacker Jaylon Smith as well as athlete and former USC commit Max Redfield, who will likely play safety in South Bend. The Irish also have a pair of top offensive tackles as well as Top 5 running back Greg Bryant.

4. Michigan: Brady Hoke has put an emphasis on the offensive line, and that unit is led by the trio of David Dawson, Patrick Kugler and Logan Tuley-Tillman. Quarterback Shane Morris is also on board, but the Wolverines would love to add Derrick Green, who is the best uncommitted running back in the country. 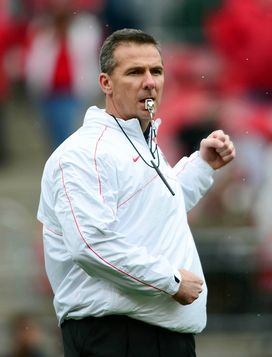 US PRESSWIREUrban Meyer will look to close strong in his second recruiting cycle in Columbus.

5. Ohio State: Urban Meyer has verbals from three of the Top 15 cornerbacks in the nation, and tackle Joey Bosa and outside linebacker Mike Mitchell lead the defensive haul. But the Buckeyes would love to add another playmaker on offense, so keep an eye on Oregon commits Dontre Wilson and Tyree and Tyrell Robinson.

6. USC: The Trojans have put a priority on defense, and Lane Kiffin has commitments from safeties Su'a Cravens and Leon McQuay III, two of the best in the country. Defensive tackle Kenny Bigelow and cornerback Jalen Ramsey are also in the group, along with Max Browne, the best pocket passer in this class.

7. Texas A&M: Kevin Sumlin is working his magic in College Station, and he has loaded up on receivers for Heisman Trophy winner Johnny Manziel. Ricky Seals-Jones, who can be a dynamite red-zone option, leads the way. The Aggies also have concentrated on linebackers and defensive tackle.

8. Georgia: The Bulldogs already have 29 commitments, but they would love to add Laremy Tunsil, an offensive tackle who is favoring the 'Dawgs over Alabama. Inside linebacker and safety have been a priority, and Mark Richt always has a chance to close strong.

9. LSU: The Bayou Bengals recently landed Kendell Beckwith, the second-best player in Louisiana. He will likely play outside linebacker or defensive end after starring on both sides of the ball at the prep level. Quarterbacks Hayden Rettig and Anthony Jennings as well as seven defensive linemen lead the way.

10. Florida State: The Seminoles continue to bring in top talent, including defensive tackle DeMarcus Walker, who flipped from Alabama. Jimbo Fisher and Co. would love to land Matthew Thomas, the top-rated outside linebacker in the country, as well as Top 5 wide receiver Stacy Coley.

12. UCLA: Adrian Klemm, who is the team's running game coordinator/offensive line and top recruiter, is paying dividends for Jim L. Mora's staff. The Bruins have seven O-Linemen committed, led by center Scott Quessenberry and guards John Lopez and Caleb Benenoch. Keep an eye on the defensive side of the ball, too, as the Bruins are still in play for Top 5 safety Priest Willis and cornerbacks/teammates Johnny Johnson and L.J. Moore.