It's still very early in the race for the Heisman Trophy, and not much has changed since last week.

But here is how the National Football Post stacks up its Heisman Watch heading into Week 5.

Oregon QB Marcus Mariota: The Ducks enjoyed a bye last week and are preparing to host Cal at Autzen Stadium on Saturday. Despite the fact that Nick Aliotti's defense always goes under the radar, that unit will be tested by the Bear Raid offense. If the Bears can score points, this could turn into a shootout, which will help Mariota's numbers. If not, the Ducks should still score plenty of points against a young Cal defense. The redshirt sophomore has recorded 1,151 total yards and 11 touchdowns against no interceptions in three games, including a career-high 456 passing yards and five total touchdowns against Tennessee in the team's last contest. The Ducks will be in the spotlight all season long, so a trip to New York is well within Mariota's reach if he continues on this pace.

Texas A&M QB Johnny Manziel: The defending Heisman Trophy winner accounted for 346 yards and three touchdowns in just more than a half of play to help the Aggies beat SMU 42-13 last week. The redshirt sophomore had 244 passing yards and a touchdown as well as 102 rushing yards and two more scores against the Mustangs. While he has a steep hill to climb if he wants to repeat because there likely will be Johnny Football fatigue in some voters, his 562 total yards and five touchdowns against two-time defending BCS national champion Alabama still stands out. He is special, but how much Heisman love will he get if the Aggies fall one or two more times? 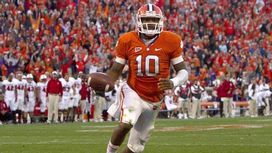 US PRESSWIRETajh Boyd overcame a sluggish start to lead Clemson over NC State.

Clemson QB Tajh Boyd: The senior missed a lot of open receivers during the Tigers' sluggish start to their game against NC State last Thursday night, but he still managed to complete 24 of 37 passes for 244 yards and three touchdowns against no interceptions to help Clemson beat the Wolfpack 26-14. It was the type of game that the Tigers may have let slip away in the past, so stealing the road win was huge. Boyd's performance in the season opener against Georgia still carries a lot of weight, as he recorded five touchdowns and played turnover-free. The Tigers still host Florida State, play in-state rival South Carolina and could have another contest in the ACC title game as well, so the numbers should be there at the end of the year.

Alabama QB AJ McCarron: McCarron shook off an interception to complete 20 of 26 passes for 258 yards and a 30-yard touchdown to DeAndrew White in the fourth quarter to help Alabama to a 31-6 victory over Colorado State one week after the high-pressured contest against Texas A&M. In that game against the Aggies, McCarron proved that he is much more than a game manager. He played a nearly flawless game in College Station, throwing four touchdown passes and helping the team score 35 consecutive points after it fell behind 14-0. Overall, he was 20 of 29 through the air for 334 yards in that high-profile contest. The veteran signal-caller is 27-2 as a starter and will have a chance to win the award without staggering numbers if his team remains in the BCS title race.

Louisville QB Teddy Bridgewater: The junior threw four touchdown passes as the Cardinals allowed a school-record 30 yards during a 72-0 blowout of Florida International. Bridgewater connected with DeVante Parker for two scores and Gerald Christian and Eli Rogers for one apiece, and he finished the blowout with 212 yards on 17-of-22 passing. The major issue for Bridgewater is he will not have a ton of chances to perform on a big stage because he plays in a conference that is not elite. If the Cards go undefeated, it would be hard to not at least see Bridgewater in New York. To win, he needs to put up huge numbers in the process.

UCLA QB Brett Hundley: The redshirt sophomore passed for 280 yards and three touchdowns on 23-of-35 passing as the Bruins beat New Mexico State 59-13 and recorded a school-record 692 yards. Hundley did, however, toss two interceptions against the Aggies. But with his strong performance in a win over Nebraska on the road and high-profile games against Oregon and Stanford remaining, Hundley will have a chance to be in the mix for the hardware.

Georgia RB Todd Gurley: The sophomore, who last year became the first Bulldogs running back to rush for at least 1,000 yards as a true freshman since Herschel Walker did it in 1980, started off this season strong despite not even being 100 percent healthy. He only had 91 yards and a touchdown on 21 rushes last week in the team's win over North Texas, but the Bulldogs still have games against LSU and Florida, so Gurley will get more high-profile matchups to show that he is the best running back in the country.