Twelve weeks of the 2013 college football season are in the books, and the race for the Heisman Trophy remains a very close, quarterback-friendly contest.

Here is how the National Football Post stacks up its Heisman Watch heading into Week 13.

Florida State QB Jameis Winston: The redshirt freshman played only the first half of the Seminoles’ 59-3 win over Syracuse this past week, completing 19 of 21 passes for 277 yards and two touchdowns against no interceptions. It was his second game this fall where he’s completed more than 90 percent of his throws. Until we know more about the investigation for an alleged sexual assault that took place last December, the focus will remain on his on-field performance. He has played with poise and conviction throughout his first season as the starter, and he has been particularly effective on third down all year. The ‘Noles don't have a strong slate the rest of the way, so Famous Jameis won't have too many spotlight games. But the hardware could go to a redshirt freshman for the second year in a row — if the off-the-field matter is cleared. 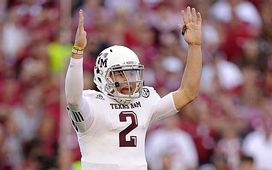 Texas A&M QB Johnny Manziel: The defending Heisman Trophy winner, who likely played his final home game on November 9 in a 51-41 win over Mississippi State, was off this past weekend. The Aggies return to action this week at LSU in a game that could really strengthen his candidacy. He may have to contend with Johnny Football fatigue among some voters, and there are some who may cite the “integrity” clause as well, fair or not. But the dual-threat redshirt sophomore signal-caller’s 562 total yards and five touchdowns against two-time defending BCS national champion Alabama is arguably the best performance from a player all season.

Baylor QB Bryce Petty: The Bears passed another test this past weekend to remain unbeaten, as Art Briles’ squad logged a 63-34 win over Texas Tech in Arlington despite falling behind 20-7 in the first quarter. The Bears are 9-0 for the first time in school history, and Petty led the way against the Red Raiders. He threw three touchdown passes and ran for two more, which marked his third five-touchdown game of the season. Petty is gaining ground in this race as he continues to lead a prolific Bears offense that is a bit banged-up. He is the latest in a long line of efficient signal-callers in Briles’ system, but contests against Oklahoma State and Texas remain. If he continues to play well against the tougher competition, Petty could at the very least net an invite to New York and perhaps win the award.

Oregon QB Marcus Mariota: The dual-threat Ducks signal-caller was able to bounce back from his worst performance of his once-sterling season last week against Stanford, as the Ducks took care of business against Utah on Saturday. However, he remained hampered by a left knee injury, which made him pretty much a passer only and took away his running ability. He finished with negative rushing yards for the second straight week. However, Mariota is still the only quarterback in the country to have yet to throw an interception this season. But the redshirt sophomore will need to have a huge surge in the season’s final weeks to retake the lead in this race.