West Virginia quarterback Geno Smith is human after all.

The player at the top of the National Football Post's early Heisman Trophy Watch lists struggled mightily this past weekend against Texas Tech in a blowout loss, and in the process his sparkling Heisman resume took a hit.

Does Smith still have a commanding lead?

Let’s take a look at how the NFP sizes up the race as we enter Week 8. And as the weeks continue to get shaved off of the season, this list will dwindle to a final five. 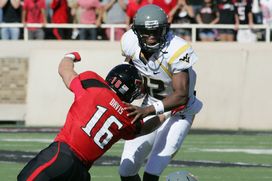 US PRESSWIREGeno Smith had a rough day against Texas Tech, but he remains the Heisman favorite.

Geno Smith, QB, West Virginia: The Mountaineers signal-caller just could not get the offense into a rhythm against a much-improved Texas Tech defense in a 49-14 loss in Lubbock. And, of course, the WVU defense did not offer the offense much support, allowing the Red Raiders to tally 35 first-half points. Smith finished with 275 passing yards and a touchdown, but he just couldn’t rescue his team as the defense was overmatched. Now, this was only one game. And we have to keep in mind the gaudy numbers that Smith has already accumulated, as well as the eight-touchdown, zero-interception contest he had against Baylor. I just don’t see this Mountaineers defense improving enough to stop some of the difficult teams left on the schedule, however. Still, Smith has yet to throw an interception this season. He remains, quite frankly, ridiculous. He has a big test coming up this weekend against Kansas State.

Braxton Miller, QB, Ohio State: It’s getting to the point where Miller is having to overcome a porous defense just as Smith has to each week. The Buckeyes dual-threat signal-caller was involved in yet another close game this week against Indiana after the Hoosiers rallied for 15 points in a 35-second span in the last two minutes. Miller threw touchdown passes of 46 and 60 yards to Devin Smith, and he added a 67-yarder on the ground. The perfect fit for Urban Meyer’s spread scheme, Miller recorded at least 100 yards rushing for the third game in a row. He has seemingly done it all for the Buckeyes this fall both on the ground and through the air and will remain in the race as long as OSU continues to win.

Collin Klein, QB, Kansas State: The often-overlooked dual-threat quarterback already has led the Wildcats to a huge win on the road earlier this year against Oklahoma. And Klein will have a huge opportunity this week in a one-on-one matchup against Heisman frontrunner Geno Smith in Morgantown. While Klein will never have the most gaudy passing statistics, he’s been more efficient through the air this fall. And not many quarterbacks are better as a runner, especially when the team needs the tough yards. Perhaps no player is as important to his team as Klein is to Kansas State. Smith will likely put up better numbers on Saturday, but Klein has the much better defense to help his cause.

Manti Te'o, LB, Notre Dame: The leader of the dominant Fighting Irish defense is arguably playing better than any defender in America. This past weekend against Stanford, the Hawaii native had 11 tackles and a plethora of big hits to help Notre Dame beat the Cardinal 20-13 in overtime. He was part of a unit that controlled the line of scrimmage against a team that relies on a physical downhill attack. And he was very much involved in the goal-line stand that kept Stepfan Taylor out of the end zone. The senior had very good outings against Navy, when he had eight tackles, a fumble recovery and an interception; at home against Michigan, when he notched eight tackles and two interceptions; and Michigan State, when he recorded 12 tackles. He’s a true difference-maker who is strong against the run and pass. The Irish still have at least two showcase games remaining (at Oklahoma and at USC), so primetime opportunities remain there for Te’o to continue to make a statement.

AJ McCarron, QB, Alabama: The Crimson Tide signal-caller keeps taking care of business while going under the national radar. He's thrown 12 touchdowns against zero interceptions, but he puts up pedestrian numbers at times because Alabama is so dominant on the ground and the team is most always protecting a lead. Still, he's one of the best quarterbacks in the nation.

EJ Manuel, QB, Florida State: The Seminole completed 27 of 34 passes for a career-high 439 yards and four touchdowns in a 51-7 win over Boston College. He may be hurt by the fact that the 'Noles suffered a meltdown in Raleigh two weeks ago, but he had a standout game in the showcase contest against Clemson earlier in the year. 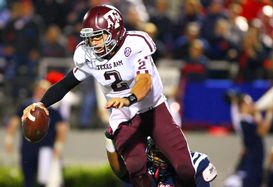 US PRESSWIREJohnny Manziel is arguably the most exciting player in the SEC.

Johnny Manziel, QB, Texas A&M: While no freshman has ever won the Heisman, the Aggies dual-threat QB has quickly become one of the most exciting players in America. He's coming off of a game in which he broke his own SEC record for total yards, throwing for 395 yards and running for 181 yards en route to scoring six touchdowns in a wild win over Louisiana Tech. He's thrown 14 touchdowns against three interceptions and also leads the conference with 676 rushing yards and 10 touchdowns.

Stedman Bailey/Tavon Austin, WR, West Virginia: The Mountaineers' receiving duo continue to put up ridiculous numbers, and they'll need to continue to do so to remain in the conversation.

De’Anthony Thomas, ATH, Oregon: The dynamic Duck is coming off of a bye week and will have a chance this week to showcase his talents in front of a national primetime audience at Arizona State on Thursday. He is averaging 9.2 yards per carry and has recorded nine total touchdowns this fall.