Seven weeks of the 2013 college football season are in the books, and the race for the Heisman Trophy remains as competitive as ever.

Here is how the National Football Post stacks up its Heisman Watch heading into Week 8.

Oregon QB Marcus Mariota: The dual-threat Ducks signal-caller finally played a full game after so many blowouts this season, throwing for 366 yards and three touchdowns and adding 88 more yards and a score on the ground in the team's 45-24 win over Washington to extend its winning streak to 10 over the Huskies. Mariota, who completed 24 of 31 passes and topped 300 yards passing for the sixth time in his college career, is playing nearly flawless football this season and seemingly drove the Ducks down the field whenever the Huskies tried to steal the momentum with a score of their own. The redshirt sophomore should remain in the spotlight all year long, so a trip to New York is well within Mariota's reach if he continues on this pace. And an undefeated mark could win him the hardware. 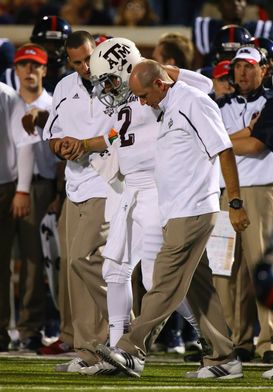 US PRESSWIREJohnny Manziel stayed in the game despite injuring his knee against Ole Miss.

Texas A&M QB Johnny Manziel: The defending Heisman Trophy winner stayed in the game after injuring his knee early in the contest against Ole Miss, and he rallied the Aggies to a come-from-behind victory for the second straight season in Oxford. He completed 31 of 35 passes and recorded 470 total yards with two rushing touchdowns. While he did toss an interception in the end zone and also fumbled in the fourth quarter, the redshirt sophomore scrambled for a conversion on a 4th-and-7 that ultimately led to the game-tying scoring run late in the fourth quarter on the same drive. He has to contend with Johnny Football fatigue among some voters in all likelihood, but his 562 total yards and five touchdowns against two-time defending BCS national champion Alabama is arguably the best performance from a player all season.

Clemson QB Tajh Boyd: The senior threw for 334 yards to become the Tigers' all-time passing leader in the team's too-close-for-comfort win over Boston College. The second ACC quarterback to account for 100 career scores, Boyd's 6-yard touchdown run in the fourth quarter finally gave the Tigers the lead over BC after they had struggled throughout the contest. His five-touchdown, zero-turnover performance in the season opener against Georgia still carries a lot of weight, and he has a big-time matchup with Jameis Winston and Florida State this week. A game against South Carolina and a potential ACC title game also loom. Boyd will continue to be in the spotlight, and the dual-threat signal-caller's numbers should be there at the end of the year.

Florida State QB Jameis Winston: The redshirt freshman and the 'Noles enjoyed a bye this past week and are now preparing for their huge ACC showdown at Clemson this week. Through five games this season, "Famous Jameis" has thrown for 1,441 yards with 17 scores against just two interceptions. In all three ACC games this year, he has at least 300 passing yards and four touchdowns. He has played with poise and conviction throughout the early part of his career, and he'll have the first major national showcase game of the season against Dabo Swinney's squad. A game against Florida's tough defense also looms. It will be interesting to see if a redshirt freshman can win the hardware two years in a row.

UCLA QB Brett Hundley: The redshirt sophomore had the most prolific passing performance of his career, throwing for a career-high 410 yards and three touchdowns in the Bruins' 37-10 victory over Cal last Saturday night. He already has a strong performance against Nebraska on the road in his back pocket, and he has high-profile games against Oregon and Stanford. He will have a chance to be in the mix for the hardware if he plays well against the Ducks and the Cardinal.

Louisville QB Teddy Bridgewater: The junior signal-caller didn't have the standout effort that many expected in last Thursday night's 24-10 win over Rutgers, as he was intercepted for the first time since Week 1 and also fumbled. But the Cardinals are still unbeaten, and he did manage to throw for 310 yards and two touchdowns. Bridgewater won't have a ton of chances to perform on a big stage because the American Athletic Conference is not elite, but he does have a Friday night contest to excel this week when the Cards play UCF. If Louisville goes undefeated, it would be hard to not at least see Bridgewater in New York. To win, he needs to put up huge numbers in the process.