The Wildcats quarterback remains in the lead to claim the award after another strong performance this past weekend, as he led the Wildcats to a win over an Oklahoma State team that possesses its own prolific offense.

But Oregon running back Kenjon Barner made the biggest move up the board after his filthy performance in a shootout win at USC.

Let’s take a look at how the NFP sizes up the race entering Week 11. And pretty soon, this list will dwindle to a final five.

Collin Klein, QB, Kansas State: In a 44-30 win over Oklahoma State, the dual-threat quarterback went 16-of-22 passing for 245 yards and added 64 yards with a touchdown on 17 rushes. The senior signal-caller has helped the Wildcats put up at least 50 points five times this fall, and the team remains unbeaten and in the thick of the BCS race. Klein will never have the most gaudy passing statistics, but he’s been more efficient through the air this fall and no player is as important to his team as Klein is to Kansas State. But Klein, who recorded his 50th career rushing touchdown against the Pokes, left last week’s game with an apparent head injury. The nation’s top-rated passer is a question mark this week at TCU, which has a stout run defense. If he doesn’t play, he could be overtaken for the Heisman lead. 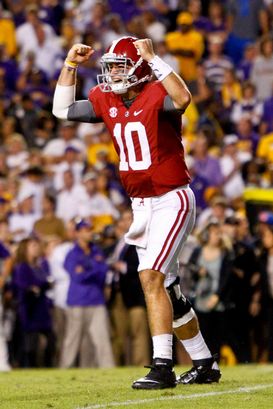 US PRESSWIREAJ McCarron led the Crimson Tide on a clutch game-winning drive last week against LSU.

AJ McCarron, QB, Alabama: The signal-caller for the defending BCS national champion Crimson Tide did what he had to do for his team when the game was on the line against LSU: lead a game-winning drive to keep alive the Tide’s hopes for a second consecutive national championship. McCarron made key throws on the game-winning drive, with none bigger than his swing pass to freshman running back T.J. Yeldon for the go-ahead score with less than 1:00 remaining against the Tigers. Although he struggled for much of the second half, McCarron led the clinching 72-yard drive against one of the best pass defenses in the nation. He finished just 14-of-27 passing for 165 yards and one touchdown as well as one score on the ground in the 21-17 win, but his Heisman moment will help him continue to gain more traction as a serious candidate. The junior quarterback has still yet to throw an interception and is one passing touchdown from Alabama’s single-season record. He has another test this week against Texas A&M, but his final drive against the Tigers will have staying power.

Braxton Miller, QB, Ohio State: The dual-threat signal-caller had two passing touchdowns and one rushing score as the Buckeyes cruised to an easy 52-22 win over Illinois last weekend. The sophomore has six 100-yard rushing efforts on the season, and he still has the athletic one-yard touchdown dive in the third quarter against Penn State two weeks ago that will stay in voters’ minds. Miller has shown his toughness throughout this season as he’s been banged-up, and he has been the perfect fit for Urban Meyer’s spread scheme. He has been a one-man show at times and should remain in the race as long as OSU continues to win. But the Buckeyes only have two contests remaining after their bye this week.

Kenjon Barner, RB, Oregon: Simply put, Barner exploded last week in the Ducks’ win at USC, recording 321 yards and five touchdowns on 38 rushes in a 62-51 win over the Trojans. In the process, he set a record for most opponent rushing yards against 'SC. He has had four games of three scores on the ground and four contests of at least 140 rushing yards. And he still has some big games left to remain in the national spotlight for the undefeated Ducks. But how can he possibly top last week’s performance this Saturday at Cal?

Manti Te'o, LB, Notre Dame: The leader of the dominant Fighting Irish defense didn’t have any game-changing plays in the team’s triple-overtime win over Pittsburgh in South Bend, but he did sack quarterback Tino Sunseri late in the fourth quarter for an eight-yard loss. While he had his streak of games with double-digit tackles snapped at four, he has had studly performances on big stages this fall, which is always an important feat in a Heisman race. He’s a true difference-maker who is strong against the run and pass, and a primetime game with USC to close the regular season will give Te’o a chance to make a strong final statement. His trip to New York City for the Heisman ceremony is almost surely set in stone.