Last week, the National Football Post unveiled its initial Heisman Trophy Watch list. And while it's still very early in the season, some players — namely a certain West Virginia quarterback — are starting to separate themselves a bit from the pack.

Because we're still early in the season, I have tended to lean toward "Most Valuable Players" over those who have accumulated more gaudy statistics. In the case of Geno Smith, however, there's no denying MVP status and the ridiculous numbers.

With that being said, these players have stood above the rest of the pack as we head into Week 6 of the 2012 season. And as the weeks continue to get shaved off of the season, this list will dwindle to a final five.

Geno Smith, QB, West Virginia: The Mountaineers signal-caller was 45 of 51 for 656 yards with 8 touchdowns and no interceptions against Baylor on Saturday in Morgantown, highlighting an offensive explosion that saw Dana Holgorsen's squad roll up 807 yards of total offense. Smith has mastered Holgorsen's complex up-tempo scheme, always looking in control of the unit. The quarterback was not No. 1 in my initial Heisman rankings released last week because of the pass-happy offense he plays in. However, seeing him consistently make the right reads and great throws against the Bears was special. No one can deny the talent of Smith and the touch he puts on some of his throws, whether they are short, intermediate or deep routes. Since he threw his last interception, he has tossed 26 scoring passes. And that's ridiculous. It will be interesting to see if this Mountaineers defense can improve enough to stop some of the difficult teams left on the schedule, however. The game at Texas this week is when the Mountaineers' real season begins. Manny Diaz will certainly throw everything he can at Smith to try and thwart his Heisman Trophy bid. US PRESSWIRECollin Klein is the most valuable piece to K-State's operation.

Collin Klein, QB, Kansas State: The often-overlooked dual-threat quarterback notched a huge win on the road two weeks ago against Oklahoma, helping K-State exorcise some demons from last year's meeting with OU. Klein will never have the most gaudy passing statistics, but he's been more efficient through the air this fall. And not many quarterbacks are better as a runner, especially when the team needs the tough yards. Perhaps no player is as important to his team as Klein is to Kansas State. The Wildcats are coming off of a bye week and return to action on Saturday against Kansas.

EJ Manuel, QB, Florida State: Manuel and the Seminoles remained unbeaten with a 30-17 win over South Florida this past week. The dual-threat signal-caller threw for 242 yards and a touchdown and has not tossed an interception since the season opener. With the win two weeks ago over Clemson, the 'Noles passed their biggest early-season test. And a big part of that success was due to the career game played by Manuel. He recorded 482 yards of total offense against the Tigers, and FSU has a very favorable schedule the rest of the way. If Jimbo Fisher's squad doesn't trip up, a spot at the Heisman ceremony in New York City could be there for Manuel's taking.

Braxton Miller, QB, Ohio State: The dual-threat signal-caller accounted for three turnovers in the Buckeyes' road win at Michigan State this past week. However, he was knocked around all game yet still was able to record 315 total yards and a touchdown pass in the 17-16 win over the Spartans. He has seemingly done it all for the Buckeyes this fall both on the ground and through the air. He will remain in the race as long as OSU continues to win, but he'll have a tough test this week under the lights at home against a hot Nebraska squad.

Stefphon Jefferson, RB, Nevada: The Wolf Pack running back was a workhorse in Nevada's 34-21 win over Texas State this past weekend, rushing 40 times for 178 yards. He has had at least 135 rushing yards in each contest and in separate games has run for 247 yards and rushed for six scores. He was also instrumental in the team's upset of Cal and was not the reason for his team's last-minute loss to South Florida. The Wolf Pack don't get a lot of publicity playing in the Mountain West, but Jefferson deserves it thus far.

David Ash, QB, Texas: Considered the weak link of the Longhorns heading into this fall after beating out Case McCoy for the starting job, Ash has been one of the main reasons for the renewed hopes in Austin for a Big 12 title. The athletic signal-caller is coming off of a strong win at Oklahoma State in Stillwater, where he threw three touchdown passes to Jaxon Shipley and led Texas on a 75-yard scoring drive after the Cowboys took the lead with 2:34 to play. Included in that drive was a clutch fourth-down conversion to tight end D.J. Grant for a 29-yard gain to keep the drive going. We will now see how he fares in a potential shootout with West Virginia's Smith this week. 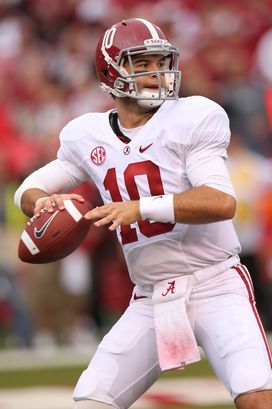 US PRESSWIREAJ McCarron is going under the radar in the Heisman Trophy race.

AJ McCarron, QB, Alabama: While Georgia's Aaron Murray will always have the more impressive numbers, McCarron's efficiency stands out, as well as the fact that he has been the leader of an offense breaking in new playmakers. The signal-caller broke Brodie Croyle's school mark of 190 consecutive passes without an interception, finishing the win over Ole Miss with 206 in a row. While he continues to go under the radar, playing for the No. 1 team in the nation will keep him in the race all season long.

De'Anthony Thomas, ATH, Oregon: "Black Mamba" will always likely be overshadowed in the statistics department by quarterback Marcus Mariota and running back Kenjon Barner. But anyone familiar with the Ducks knows that the explosiveness that Thomas provides is unparalleled in the college game and that he is a big play waiting to happen. So his value is unquestioned. Thomas scored a touchdown in the Ducks' win over Washington State this past week but was limited to 26 rushing yards and 28 receiving yards. He is the Ducks' primary punt returner as well as a running back and slot receiver, so he will have opportunities for big plays all over the field.

Manti Te'o, LB, Notre Dame: The leader of the Fighting Irish defense is arguably playing better than any defender outside of Georgia's Jarvis Jones. He has three interceptions, two fumble recoveries and is very good defending the pass. The Irish still have at least three showcase games remaining (vs. Stanford, at Oklahoma and at USC), and the game this week against Miami (FL) at Soldier Field in Chicago is another primetime opportunity for Te'o to make a statement.

Stedman Bailey/Tavon Austin, WR, West Virginia: Either one of these Mountaineer r eceivers could make this list, so it's only right to include them both, especially as we head into the first weekend of October. The pair has combined to record 89 catches for 1,195 yards and 17 touchdowns on the season.