Alabama’s Trent Richardson did all he could to get the Crimson Tide into the end zone and closer to a berth in the BCS national championship game. Stanford’s Andrew Luck, meanwhile, notched yet another victory as the Cardinal remained undefeated.

Week 10 is in the books, and the Heisman Trophy race remains tight as we head deeper into November.

So which star players have the edge for the hardware after ten weeks of the season?

Here are the names to monitor as we enter Week 11:

1. Andrew Luck, QB, Stanford: The prohibitive Heisman favorite helped Stanford shake off a slow start at Oregon State, and the Cardinal pulled away from the Beavers behind Luck’s 206 yards and three touchdowns. The junior signal-caller, whose 26 touchdowns are six shy of the school record he set last year, led the offense through rainy and chilly conditions in a trap game against the Beavers, one week after the Cardinal escaped Los Angeles with a triple-overtime win over USC. Luck, who completed 20 of 30 passes with one interception against the Beavers, has established himself as the candidate to beat in this race as the Cardinal extended the nation’s longest winning streak to a school-record 17 games. He is now 29-5 as a starter, and he’ll have an even brighter spotlight when he faces off against Oregon this week and Notre Dame to close the regular season. 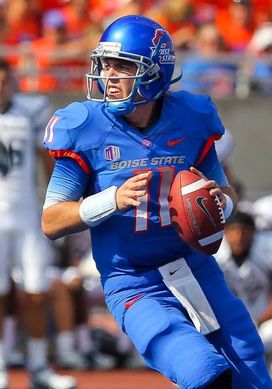 ICONKellen Moore tossed five touchdowns against UNLV despite not playing most of the fourth quarter.

2. Kellen Moore, QB, Boise State: Moore returned from the Broncos’ bye week to become college football’s winningest quarterback, recording his 46th win as a starter to surpass former Texas quarterback Colt McCoy for the most wins all-time. He tossed five touchdowns against UNLV despite not playing most of the fourth quarter, and he finished 18 of 31 for 224 yards through the air. The senior signal-caller, whose 46-2 career mark gives him the best career winning percentage (95.8 percent) among active FBS quarterbacks, has thrown 128 career touchdown passes. But will voters factor in his weaker schedule when voting for this award? It also may hurt his cause that he doesn’t have a showcase game down the stretch, although TCU has risen back to prominence in recent weeks.

3. Trent Richardson, RB, Alabama: The junior workhorse proved once again that he is the center of Alabama’s offense in the Crimson Tide’s loss to top-ranked LSU on Saturday night in Tuscaloosa. Recording 89 yards on 23 carries was a real coup against a stout Tigers defense, but his five catches for 80 yards was even more impressive — and shocking considering that he twice escaped out of the backfield uncovered for big gains. He didn’t find the end zone against the Tigers’ defense, but his rare combination of power and speed helped give the Tide good field position throughout the night. The tough-nosed runner is positioned as the best non-QB in this race, and he still has a chance to take home the hardware despite the Crimson Tide’s loss.

4. Case Keenum, QB, Houston: In consecutive weeks, Keenum has become the FBS career leader in total offense, the all-time FBS leader in touchdown passes and the major college football career leader in passing yards with 17,212 — eclipsing former Hawaii quarterback Timmy Chang’s career mark. The sixth-year senior has led Houston to its first 9-0 start, as he completed an incredible 39 of 44 passes for 407 yards with two touchdowns and no interceptions against UAB. He’s unquestionably a legitimate Heisman contender in Kevin Sumlin’s offense, which has produced five 400-plus-yard efforts from Keenum this season.

5. David Wilson, RB, Virginia Tech: The one constant of the Hokies’ offense this fall has been Wilson, who has rushed for 1,185 yards and 7 touchdowns. The 5-10, 205-pound junior is the ACC’s leading rusher, and he recorded his sixth straight 100-yard game against Duke two weeks ago. The Hokies were off this past week, and they will have a nationally televised game on Thursday at Georgia Tech. Wilson has hit triple digits in yardage eight times this season and should net some consideration for this hardware.