With the college football offseason sadly here after Alabama captured its second BCS national championship in three seasons, we turn our attention to off-the-field news.

Let’s take a look at the latest coaching happenings around the country.

Is Brent Venables headed to West Virginia? The Oklahoma co-defensive coordinator had an offer on the table from Mountaineers head coach Dana Holgorsen to be the team’s sole DC, a role which could have been intriguing for Venables because he would have been able to call plays. With Mike Stoops coming back to Norman to assume a co-DC role, it was reported that Venables would have to relinquish those duties to the head coach’s brother — and that doesn’t seem like something Venables would be content doing. Of course, West Virginia is seeking a new defensive leader after Jeff Casteel took his 3-3-5 scheme with him to Arizona, where he will be reunited with Rich Rodriguez. But late Friday the word was that Venables had withdrawn from consideration at WVU. Is Venables staying in Norman? Or could Clemson, which is looking to make a move after letting go of defensive coordinator Kevin Steele following the Tigers’ embarrassing loss to West Virginia in the Orange Bowl, be a major player? Keep in mind that Clemson athletic director Terry Don Phillips is very familiar with Venables from his time as AD at Oklahoma State. 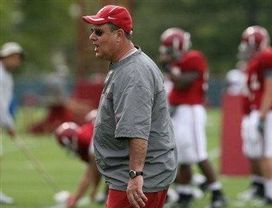 One place Venables won’t end up is Knoxville, where Tennessee head coach Derek Dooley officially landed a defensive coordinator to replace Justin Wilcox, who left to replace Nick Holt at Washington. It looked as if Buddy Green would be the new hire, but the 58-year-old Navy DC re-evaluated the move from Annapolis, possibly because of his love for the Naval Academy. The Midshipmen would not have been able to match the money that would have been given at Tennessee, but the former Tennessee-Chattanooga head coach could be in line for a raise as a reward for showing his loyalty.

Who did the Vols end up hiring? Sal Sunseri, the Alabama associate head coach and linebackers coach for the past three seasons. Sunseri, who will bring the 3-4 scheme with him from Tuscaloosa, received a nice contract, too, netting a three-year deal worth $2.4 million. Dooley is familiar with Sunseri from their time on Nick Saban’s staff at LSU in 2000, and Sunseri is one of the best recruiters in the country — something that could be crucial as the Vols sprint toward National Signing Day. Sunseri is now the 4th former Alabama employee that Tennessee has hired since September. Of course, Vols AD Dave Hart was hired away from ‘Bama.

Could Gary Crowton be on his way to Utah? The former LSU and Maryland offensive coordinator as well as BYU head coach was interviewed by Utes head coach Kyle Whittingham this week as the team looks for Norm Chow’s replacement. Chow, of course, accepted his first head-coaching gig at Hawaii. Crowton’s offense at Maryland last year finished 67th in the country in total offense as former ACC rookie of the year Danny O’Brien struggled, getting benched in favor of C.J. Brown. The Terps also dealt with woes at receiver in the absence of Torrey Smith and Adrian Cannon, who moved onto the NFL. Crowton was also blamed by LSU fans for its lack of offense in 2010, though we saw Monday night in the BCS title game that the Tigers’ offensive woes were glaring even without Crowton.

When Charlie Weis took over as head coach at Kansas, one of the first things that I mentioned was the need for him to hire a strong defensive coordinator as well as surround himself with assistants strong on the recruiting trail. Weis was already able to land quarterbacks Dayne Crist and Jake Heaps via transfer, but we’ll see how the Jayhawks do on National Signing Day and moving forward with recruits. Weis did finally land his defensive coordinator Friday, as the school announced that Dave Campo would fill the position. The former Dallas Cowboys head coach is a veteran college and NFL coach, but he hasn’t been in the college game since serving as Miami’s secondary coach in 1987-88. Will he be able to relate to the current college student-athlete, and will he be able to sell recruits when he’s on the road?

Alabama is searching for a new offensive coordinator with Jim McElwain taking over as Colorado State’s head coach. While former New York Jets OC Brian Schottenheimer has been the hot name, keep an eye on former Jacksonville Jaguars OC Dirk Koetter, who helped oversee prolific offenses when he was a head coach at Arizona State. According to multiple reports, Koetter interviewed with the Crimson Tide, and head coach Nick Saban has shown with previous OC hires (McElwain and Major Applewhite) that he will hire someone he isn’t familiar with from previous coaching stops. The other major name to keep an eye on is Doug Nussmeier of Washington. Huskies head coach Steve Sarkisian said on local radio Friday that both Alabama and Nussmeier have mutual interest and that Nussmeier is intrigued by the possibility of calling his own plays. Of course, Sarkisian is the one who calls Washington’s offensive plays. Sarkisian did say that it is a possibility he could give up play-calling duties if that means keeping Nussmeier in Seattle. Stay tuned.