This past week will go down as one of the worst in college football — and college athletics as a whole — in recent memory.

Thank goodness we only have fourteen days — just two weeks — until the first college football Saturday of the 2011 season.

So let’s open up the college football notebook and see what’s happening across the country.

Assessing a potential ACC without Miami

Although the potential rampant violations at Miami surpass the transgressions that rocked the SMU football program in the 1980's, I don't think the NCAA will apply the death penalty to a program ever again.

The sanctions applied to the Mustangs not only killed a football program, but it negatively affected the old Southwest Conference and it hurt the city of Dallas' economy. 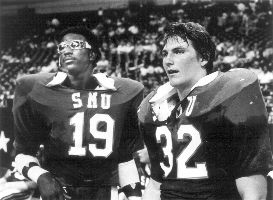 SMU received the "death penalty" in 1987. Will Miami suffer the same fate?

Of course, South Beach will never hurt for money and Miami football fans are fickle anyway, but I still don't expect the 'Canes to feel the full wrath of the NCAA as SMU experienced. Although, it’s quite possible that the Miami program could be crippled even without the death penalty — severe scholarship reduction would have such an effect.

However, it's still well too early to speculate on possible sanctions. Heck, I am still digesting that thorough Yahoo! Sports report.

But what if the 'Canes were dealt the biggest of blows? How would the ACC respond?
Andrew Jones of FOXSportsSouth.com believes that ACC commissioner John Swofford must ponder the viability of having Miami as a member of the conference — death penalty or not.

While it could be more likely that Miami would suffer sanctions closer to the level of those applied to USC, Swofford does have a responsibility to the other 11 ACC members to have an open dialogue regarding the future of the league with the 'Canes.

Let's forget about the league temporarily being an 11-member conference (if Miami was given serious sanctions), losing the ACC title game and having television revenue affected. Should Swofford consider expansion now to protect his league, as we're headed that way with superconferences anyway?

Jones believes that West Virginia and South Florida would be intriguing possibilities. While the two respective schools aren’t academically on par with many of the ACC’s other members, the two programs do bring a lot to the table.

The Mountaineers have a strong fan base, a good basketball program under Bob Huggins and is geographically aligned. Keep in mind that Virginia Tech wasn’t in the league’s initial plans to expand years ago, and look how good that move turned out.

In USF, Swofford would get another school from the Sunshine State — big for recruiting purposes — as well as the TV market in Tampa-St. Petersburg. Its fan base will continue to grow as Skip Holtz continues to build the program, and its basketball team has had a run of success despite falling on recent hard times.

Of course, we don’t know exactly what will happen to the ACC and Big East as conference expansion continues over the next few years — especially in regards to the league’s basketball conferences, which are arguably the two strongest in the nation. But Swofford should be prepared for an arms race. And the Miami situation could provide just another reason for him to be proactive in this changing landscape.

Check out these pieces while enjoying your morning coffee.

You want to know how Yahoo! Sports reporter Charles Robinson pulled off perhaps the best investigative sports piece — at least in the world of online journalism? Rachel George of the Orlando Sentinel has the story.

Check out this take from a former Miami football player.

Former SMU Mustang and current ESPN analyst Craig James joined The Herd on ESPN Radio to discuss the scandal at The U.

Manti Te’o may get all of the publicity on the defensive side of the ball for Notre Dame — and deservedly so. But it’s fellow linebacker Darius Fleming who may make the biggest impact on Bob Diaco’s unit this fall in South Bend, writes Brian Hamilton of the Chicago Tribune.

Oklahoma will get some much-needed help at linebacker this fall with the arrival of a player who just committed to Michigan this past February.

Finally, something tells me that ESPN could easily produce a part 2 to its 30 for 30 series on The U.