National Signing Day is February 1, and the Class of 2012 still has plenty of uncommitted future college stars. Be sure to stay with the NFP for all of the latest recruiting news.

Top dual-threat quarterback Jameis Winston of Hueytown High School (Hueytown, AL) remains verbally committed to Florida State, but the 6-4, 195-pounder is also still seriously considering Alabama. LSU is also in the mix, and the Tigers are in need of a signal-caller now that Gunner Kiel is in South Bend attending Notre Dame. Winston is set for an official visit to Florida State this weekend, but the problem for Jimbo Fisher, Nick Saban and Les Miles is that the quarterback is an accomplished baseball player, so he may not even see the football field at the next level. While he would prefer to play both sports in college, he knows the money in baseball as a top-round pick may be too tough to pass up. Keep an eye on Winston both as National Signing Day approaches and when the Major League Baseball draft occurs this summer.

Speaking of Florida State, since Fisher became head coach the Seminoles have had more sacks than any other program in the FBS. With top defensive end Mario Edwards leading a trio of blue-chip pass rushers committed to FSU for the Class of 2012 (Chris Casher and Dante Fowler are the others), defensive coordinator Mark Stoops is getting even more weapons to use along the defensive line to get to the quarterback.

This past week at the NFP I wrote about the five best uncommitted prospects who have yet to make a decision on their future. Here are some more top recruits who have not yet committed. 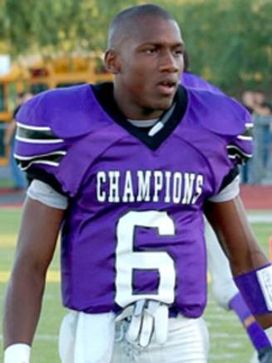 Davonte Neal is in no hurry to make a decision on his college future.

Notre Dame visited Neal at his home this week, and the receiver/cornerback will take his last official visit to Arizona on Feb.11 — 10 days after Signing Day — before deciding which college he will attend. Neal already has visited Notre Dame and Ohio State and will visit Arkansas this weekend. He said the schools he is interested in have said that they would wait for him with a scholarship even if he signs after February 1. Arizona State may also enter the mix under new head coach Todd Graham.

Garnett is considering Michigan, Notre Dame and Stanford. The guard/tackle is a true student-athlete, as he’s very interested in pursuing a degree in bioengineering. All three finalists would be great landing spots, but he may be able to play sooner at Stanford. Head coach David Shaw and his staff originally planned to recruit him as a guard, but he has put on more bulk since the staff last saw him and now could project to be a tackle. He is listed as a tackle by some recruiting services, but he played guard in the Under Armour All-America Game. He has said that he would prefer to play tackle but would play guard if that's the position that is best for his football future. He plans on making his decision public on Jan. 26.

Alexander’s senior season was cut short because of a torn ACL, but Alabama, Auburn and LSU know that the outside linebacker will be 100 percent sooner than later. The Tigers are hoping that new defensive coordinator Brian VanGorder will help in his recruitment. Auburn could have the edge because Gene Chizik and Co. pursued him hard even while he was hurt.

Harvey-Clemons is arguably the best player in the state of Georgia, and his two frontrunners are the Bulldogs and Florida. He’s scheduled to visit Florida State as well, but many believe it’s a two-horse race between Mark Richt’s squad and the Gators.

Murphy has all the tools to be a productive tackle at the next level. His strength is pass-blocking but he holds his own against the run as well. He is being heavily recruited by Stanford, USC, Oregon and Florida.

Diamond is considering Arkansas, Auburn, Michigan, Ohio State and Wisconsin. He isn't publicly leaning toward a specific school at this point, but he could be a big pick-up for Gene Chizik. The Tigers could be poised for a strong late run.

Despite not being targeted very much during his senior year, Howard still managed to account for 10 interceptions. His 4.4 40 speed is impressive, and he held his own against stud receiver Dorial Green-Beckham in the U.S. Army All-American Bowl. Florida, LSU and USC are in the running for his services, but Florida State and Miami remain in play.

Johnson is speedy, explosive and elusive. He’s considering offers from Cal, Oregon and TCU, and he’s taking an official visit to Texas A&M this weekend. He decommitted from Texas days after the Under Armour All-American Game, so he’s still up in the air on his college choice.

Darby decommitted from Notre Dame last week and is a good friend of Florida State commit Marvin Bracy. Darby, a track and field star, played six positions in high school and could be the next Greg Reid in Tallahassee.

I wrote about Fuller here.

Wright’s future is very much up in the air after his expulsion this week. He was considered a favorite to land at Michigan, but Brady Hoke rescinded Wright’s scholarship. He has received offers from Colorado, Georgia and Notre Dame, but it is uncertain whether other schools will continue to pursue Wright.