• We discussed earlier this offseason the changes that new Auburn defensive coordinator Brian VanGorder wanted to make to his unit moving forward, such as bringing in bigger linebackers instead of the smaller, quicker 'backers the team had previously been targeting on the recruiting trail. The former Atlanta Falcons DC also wants to beef up the defensive line. One change VanGorder is immediately instilling is a more aggressive yet simplistic approach on his defense. The defensive linemen cared more about their gaps under Ted Roof, who is now running the defense at Penn State, than getting off the football and hitting the opposing offensive linemen. Meanwhile, new Tigers offensive coordinator Scot Loeffler has been using less shotgun and more tight ends in the early days of camp, with the running backs being a lot more involved catching passes out of the backfield. Certainly, it's a different offense than the one run by Gus Malzahn, who is now the head coach at Arkansas State. 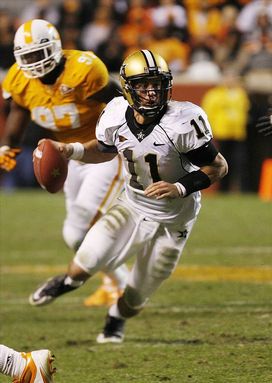 ICONJordan Rodgers has competition for the starting job at Vandy.

• The fact that James Franklin is the head coach wasn't the only reason why many had thought Danny O'Brien would be smart to transfer to Vanderbilt. Incumbent starting quarterback Jordan Rodgers had an uneven first season as a starter, struggling with his accuracy and throwing more interceptions than touchdowns, and he ended 2011 with a rough performance in the team's bowl loss to Cincinnati. O'Brien, of course, chose Wisconsin on Wednesday, so the only obstacles standing in the way of Rodgers starting the opener are Wyoiming transfer Austyn Carta-Samuels and early enrollee freshman Patton Robinette. So far, Rodgers remains ahead of both competitors. While Franklin has said he is more worried about how Carta-Samuels looks in the second half of spring drills, he also said that this competition will last into fall camp. However, that could be a good thing for Rodgers, as being pushed could help maximize his talent level and elevate the Commodores' offense.

• With Chris Rainey and Jeff Demps departing, and head coach Will Muschamp desirous of the Gators having a strong downhill rushing attack, former receiver/tight end Omarius Hines has been moved to the backfield to help out Mike Gillislee and Mack Brown, both of whom sit atop the Gators' depth chart. Muschamp and new offensive coordinator Brent Pease have been pleased by the progress of Hines, although it's way too early to tell how much of an impact he will make on Saturday afternoons in the fall. Hines certainly gives the Gators a more powerful force in the backfield, and he's athletic and explosive enough to make his presence felt as a third-down back and as a pass-catching threat. Florida expects to use Trey Burton in the backfield as well, and he certainly proved in his freshman season that he can be dangerous operating out of the backfield.

• In my Ohio State spring practice preview, I discussed the importance of head coach Urban Meyer and new line coach Ed Warinner figuring out how to assemble the team's offensive line. During the team's first practice this week, Jack Mewhort was at left tackle after starting at guard last season, and Corey Linsley was at center after playing guard in 2011. Converted tight end Reid Fragel, as expected, was lined up at right tackle, while the guard spots were occupied by Andrew Norwell and Marcus Hall.

• Al Golden is looking for playmakers on Miami's offense with receivers Travis Benjamin and Tommy Streeter headed to the NFL. One name to store away is Rashawn Scott, who is turning heads in spring practice thus far. Scott had five catches for 115 yards and two touchdowns in a recent scrimmage. Golden likes his work ethic along with his obvious talent. Meanwhile, Ryan Williams is reportedly ahead of the pack in the quarterback derby.