After the most difficult offseason in college football history, one filled with the Jerry Sandusky scandal, the Bobby Petrino saga, NCAA investigations and player dismissals, we are finally ready for play on the field.

The 2012 college football season is off and running, and I’m excited to bring back the NFP Saturday Tailgate for a third season.

We've already had some great games on Thursday and Friday, so let's continue the momentum this Labor Day weekend and dive into some of the best matchups.

So, once again, dust off that grill and get it fired up because we’re starting this weekend’s tailgate — strong. 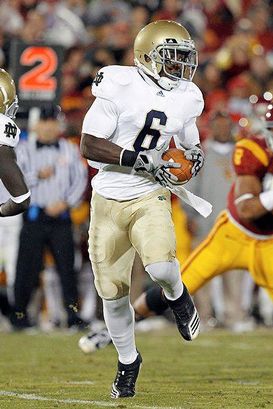 Theo Riddick takes over as the starting RB at Notre Dame with Cierre Wood out.

X-Factor: Running backs as receivers...Notre Dame offensive coordinator Chuck Martin said this preseason that running backs will not play in this offense unless they can catch the ball out of the backfield and be comfortable in the slot. So despite Cierre Wood being suspended for the first two games of the season, the Fighting Irish were planning on using Theo Riddick and George Atkinson aplenty, especially in the slot. While Wood's loss would hurt against teams such as Michigan State and USC, the Irish will be okay against Navy. Keep in mind that last season ND rushed for seven touchdowns against Navy. And the Midshipmen don't have Ricky Dobbs to rescue them. While ND fans may be a little nervous because Navy has three victories over the Irish in recent years, this one shouldn't be close — unless new Irish starting quarterback Everett Golson implodes, but I've been high on him throughout the offseason. And this is a good game to ease him into being the face of the offense.

X-Factor: Auburn's young secondary...New Tigers secondary coach Willie Martinez has the difficult task of reshaping a defensive backfield that gave up a ton of big plays last fall. While new coordinator Brian VanGorder has vowed to turn his defensive line loose, something that should help the secondary, the Auburn corners and safeties need to be more aggressive. Corner Chris Davis is the only starter who held onto his job from 2011, and he'll be joined by Ryan Smith, Jermaine Whitehead and Ryan White. Head coach Gene Chizik has said that he wants a more physical presence in the defensive backfield and an elimination of the big plays that dogged the squad last year. This is an explosive Clemson offense, led by quarterback Tajh Boyd. It will be even better in Year 2 under Chad Morris. And despite the fact that Sammy Watkins will miss this contest, Auburn still has to deal with DeAndre Hopkins and a still-solid set of receivers.

X-Factor: "Shoelace"...There's no question that Michigan quarterback Denard Robinson will need to play one of the better games of his career against Alabama if the Big Ten is to claim a marquee win over the SEC. While coordinator Greg Mattison's inexperienced defensive line will have its hands full against an Alabama offensive line that is arguably the best in the country, "Shoelace" remains the one player on the field that can be a true difference-maker at the NFL's home of the Dallas Cowboys. Expect to see a lot of read-option from Robinson, who won't have the luxury of running back Fitz Touissant in the backfield after his one-game suspension. While the Tide are replacing Courtney Upshaw and Dont'a Hightower, they simply reload. Keep an eye on Adrian Hubbard, C.J. Mosley and Xzavier Dickson because those are the new stars of the Tide defense. Robinson will need to play mistake-free, particularly through the air after throwing 15 interceptions last season. The major concern for Wolverine fans will be whether Robinson can make it through four quarters, because he's been known to get nicked up. And the 'Bama defense is arguably the most physical in the nation under Nick Saban and Kirby Smart.

Keep an eye on these intriguing showdowns

Ohio at Penn State: The Bobcats have a chance to be a BCS buster under veteran head coach Frank Solich if they can go into State College and upset the Nittany Lions. Bill O'Brien will be opening up a new era of Penn State football, and the environment in Happy Valley on game day will be one of the bigger storylines of opening weekend. How well can Matt McGloin run O'Brien's spread offense? Will we see Paul Jones if McGloin struggles? And can Bill Belton step in and produce at running back after Silas Redd's defection. Meanwhile, dual-threat quarterback Tyler Tettleton leads a very strong Bobcats offense. And their defense is strong as well, particularly up front and in the secondary. Will we see the effects of Penn State's initial defections in Week 1? I don't know how the Nittany Lions will score points in 2012, but I think they'll be able to rely on a defense that will remain solid with tackle Jordan Hill and linebacker Gerald Hodges.

Southern Miss at Nebraska: The Cornhuskers are replacing linebacker Lavonte David, cornerback Alfonzo Dennard and defensive tackle Jared Crick — three of the Big Ten’s best defenders. This unit has a new coordinator in John Papuchis, and he’s looking for playmakers and leaders to emerge. We'll get a chance to see how the Huskers fare against a Southern Miss offense that will have to replace Austin Davis, the prolific dual-threat quarterback, as well as the offensive mind of former head coach Larry Fedora. The run game is also a concern after leading rusher Jamal Woodyard suffered an injury and was arrested this offseason. But there is depth at the position, so the Huskers should be prepared to defend a heavy dosage of rushes.

Iowa vs. Northern Illinois (Chicago): The Hawkeyes enter the 2012 season with new coordinators on both sides of the ball, although new DC Phil Parker is no stranger to Iowa City and Greg Davis was the longtime OC at Texas. Last season at Soldier Field, NIU was buried by the high-powered Wisconsin offense. This season, though, the Huskies will face an offense that has a major question mark at running back. Can Damon Bullock be a lead back? If not, is Greg Garmon the answer? The strength of this season's NIU squad is actually its defense under second-year head coach Dave Doeren, the former Wisconsin DC. But the offense should eventually be potent after experiencing some growing pains. Expect Hawkeyes quarterback James Vandenberg to get plenty of opportunities to throw the football as head coach Kirk Ferentz sorts out the messy backfield situation, so expect Iowa to ride the arm of Vandenberg and the receiving skills of Keenan Davis.

Enjoy the games today and have a great Labor Day weekend!

Come back to the NFP on Monday for my Georgia Tech-Virginia Tech preview.