Forget about conference realignment, because we are ready for Week 6 action.

Is Texas ready to become a major player again?

When both programs are at the top of their game, you can’t get much better than the annual Red River rivalry between Oklahoma (4-0) and Texas (4-0). The teams meet for the 106th time in Dallas on Saturday in what many feared would be one of the last meetings between the two with conference realignment being the talk of the college football world for so long.

However, as of now, it looks like conference shuffling won't affect this annual battle despite expansion remaining the talk of the nation. But back to the on-the-field action... 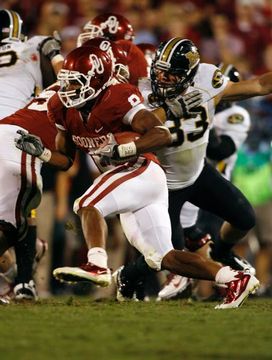 ICONCan Dominique Whaley continue to provide the Sooners with a sound rushing attack?

The Sooners come in clicking on all cylinders, with their prolific offensive attack coming off of a 62-6 thrashing of Ball State in which quarterback Landry Jones threw for 425 yards and five touchdowns — including scores of 55-plus yards a minute apart in the third quarter. And while OU may not have a game-changing back such as DeMarco Murray in the backfield, junior Dominique Whaley has produced when necessary, averaging 5.4 yards per carry while scoring 7 touchdowns. But can a rushing attack ranked 83rd in rushing yards per game find lanes against a Texas defense that is holding opponents to under 300 yards per contest — including allowing only 111 yards per game on the ground?

The Sooners have one of the best aerial attacks in the nation, however, and the Longhorns’ lack of a consistent pass rush could get exposed. Manny Diaz’s unit has just six sacks over the first four games, and pressuring Jones may be the only way to slow down this OU offense. And as if Jones needed any more confidence, he already passed his big test in Tallahassee three weeks ago when he led his offense down the field in a tight game against Florida State, converting a third-and-12 before connecting on a 37-yard touchdown pass to Kenny Stills to give the Sooners the lead for good and send them to victory.

The Longhorns, meanwhile, have yet to create a true identity on offense. After Garrett Gilbert was benched, Case McCoy and David Ash have been splitting time at quarterback, and the duo has played well up to this point. Receivers Jaxon Shipley and Mike Davis have been solid options in the passing game — when the Longhorns have aired it out — and Malcolm Brown has been productive in the lead role at running back. Fozzy Whittaker and D.J. Monroe have contributed in spurts, as well. But co-coordinator Bryan Harsin has put his mark on the unit by employing trickeration, much like he did when he was at Boise State. And the Sooners certainly are familiar with the Broncos’ offense.

The question remains whether the ‘Horns will be dynamic enough against an OU defense that seems to be hitting its stride, led by Tony Jefferson, Travis Lewis and Ronnell Lewis. Unless the Longhorns can disrupt the Sooners offense enough, Texas is going to have to keep up with OU score for score. Can Diaz make a difference with his controlled chaos and force Jones into mistakes? Or will the OU signal-caller have a stellar game against the ‘Horns as he did last season when he completed 24 of 39 passes for 236 yards and two touchdowns against no interceptions in a 28-20 victory.

Even if the Longhorns lose a close one, it would show that they are indeed back on the upswing. A bad loss, similar to Florida’s defeat at the hands of Alabama last week, and we’ll know that Mack Brown’s squad still has a ways to go.

Florida (4-1) at LSU (5-0): This is a tough spot for whoever lines up under center for the Gators. It appears that true freshman Jeff Driskel is in line to start and operate Charlie Weis’ offense, but don’t be surprised if fellow true frosh Jacoby Brissett and/or redshirt freshman Tyler Murphy play in this one as well. While the teams have split their last eight meetings, it’s hard to expect a young signal-caller being able to deliver a victory for the Gators in Death Valley. Driskel was overwhelmed last week against Alabama when he came in after John Brantley’s injury, but the Tide defense makes even veteran quarterbacks look bad.

As we know, UF running backs Chris Rainey and Jeff Demps are very good in space. But as we saw against ‘Bama, their big-play ability was negated by similar speed on defense. And the Tigers, like ‘Bama, are one of the fastest defenses in the land. And they have the most talented and deepest defensive line in the country. So a young quarterback not getting help from his rushing attack or an offensive line that was overwhelmed last week is a recipe for disaster.

Can the Gators stay in the game with their defense? Well, they’ll need to take risks and sell out, especially in early downs. Jarrett Lee has been solid under center for the Tigers, but Florida’s front seven could force him into turnovers with some exotic looks. And I expect Will Muschamp to do anything he can to rattle Lee. But LSU’s offensive line is so solid, so the Gators will have to employ all the stunts in their arsenal in trying to get to Lee. It will be interesting to see how much Tigers head coach Les Miles uses Jordan Jefferson this week, especially if Lee has trouble dealing with that athletic front seven. 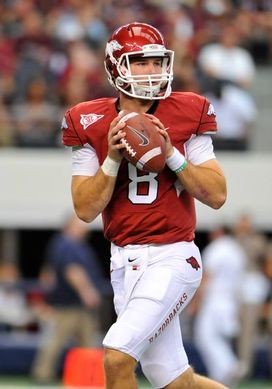 ICONTyler Wilson has taken a beating the last two weeks.

Auburn (4-1) at Arkansas (4-1): The Tigers have proven that they will never be out of a football game — win or lose. Gene Chizik’s squad notched a huge win last week at South Carolina by taking advantage of the Gamecocks’ turnovers and focusing their attention on stopping Marcus Lattimore. This week, the defense will have to be ready for a much different offense, one featuring a prolific passing attack highlighted by quarterback Tyler Wilson and his talented corps of receivers. Wilson threw for a school-record 510 yards last week in the valiant comeback win over the Aggies, a game in which he was beat up for the second week in a row. Auburn’s young defense may have grown up last week, but this Razorbacks offensive attack will be very difficult to stop, especially if Ronnie Wingo, Dennis Johnson and Broderick Green do enough in the backfield to keep the unit balanced. Both teams are banged-up, but the Hogs’ huge win last week over A&M could set them up for a nice run in the SEC West.

Michigan (5-0) at Northwestern (2-2): This is a game I circled on my calendar this past offseason because the Denard Robinson-Dan Persa quarterback matchup is one of the better matchups we’ll see all season. Unfortunately for the Wildcats, Persa is still recovering from his Achilles injury, so it’ll be interesting to see if he suffers a setback as he did last week in the loss to Illinois. Before missing the remainder of that tight contest, NU’s dual-threat signal-caller threw four touchdowns against the Illini, so clearly the ‘Cats will miss his services if he misses any more time. Making matters worse for Pat Fitzgerald’s squad is the fact that starting running back Mike Trumpy was lost for the season. Jacob Schmidt and Adonis Smith must step up and give this offense some sort of balance, something NU has lacked in recent seasons. For the Wolverines, can Greg Mattison ’s defense take its act on the road and continue to play well. The defense shut out Minnesota last week, and it’s become a big-play unit that wants to get after the quarterback. With “Shoelace” leading the offense, Michigan will continue to streak so long as the defense plays well.

Other games to keep an eye on:

Missouri at Kansas State: Bill Snyder's squad remain unbeaten after knocking off Baylor last week. Quarterback Collin Klein is getting the job done under center, but the Wildcats will host a Missouri squad that has endured a couple of tough losses (Arizona State and Oklahoma). Tigers quarterback James Franklin continues to grow, but he’ll face a defense led by linebacker Arthur Brown that always plays well under Snyder.

Miami at Virginia Tech: Hokies dual-threat signal-caller Logan Thomas was the talk of the offseason, but he hasn’t done much to help out running back David Wilson and Bud Foster’s stout defense. Virginia Tech needs to bounce back after its lifeless offensive effort last week against Clemson. Meanwhile, Miami has personnel issues on defense and quarterback Jacory Harris will see some unique looks from Foster’s unit.

Arizona State at Utah: This Pac-12 South battle would be more intriguing if the Utes didn’t have two conference losses already. With a win, the Sun Devils can have a nice upper hand in the division. The Utes will have to pull the upset without quarterback Jordan Wynn, as backup Jon Hays fills in while Wynn battles a shoulder injury. 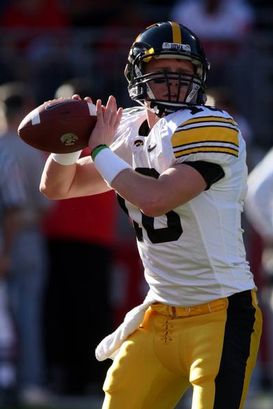 Iowa at Penn State: The Hawkeyes have been a scoring machine recently on offense behind the arm of James Vandenberg, but they'll face a tough environment Saturday afternoon in Happy Valley. Penn State quarterback Matt McGloin will have to make plays down the field while Silas Redd keeps this Nittany Lions offense balanced. Don’t sleep on the Hawkeyes in the Big Ten, as they have a friendly schedule the rest of the way.

Texas A&M at Texas Tech: Mike Sherman’s Aggies will need to bounce back from back-to-back disastrous losses in which they blew big leads. Can A&M rebound or will Tommy Tuberville’s Red Raiders remain unbeaten?

Ohio State at Nebraska: The Blackshirts were embarrassed on national television last week against Russell Wilson and Wisconsin. They’ll have an opportunity to bounce back following their disastrous showing against an Ohio State offense that is lifeless no matter who is under center. But will Taylor Martinez be able to make some plays through the air against a Buckeyes defense that is still solid?

Georgia at Tennessee: This could possibly be the most underrated game of the day, as this SEC East divisional contest features two teams that will not want to be sitting with two losses in league play. Georgia is one of the hotter teams in the SEC, but going down to Knoxville will be a tough test against Tyler Bray and that Vols offense. Can Todd Grantham's defense continue its solid play?

Have a great weekend. Enjoy all the games Saturday, and have a blast watching my Detroit Lions move to 5-0 against the Chicago Bears. #72dolphins