Week 4 is in the books, and Week 5 kicked off Thursday night with a Pac-12 upset as Washington beat Stanford behind a sound defensive game plan from Huskies coordinator Justin Wilcox.

Conference play heats up this week, as Derek Dooley begins a critical four-game stretch at Tennessee, while Andrew Maxwell and Michigan State will look to take care of business at home against undefeated Ohio State.

X-Factor: Spartans quarterback Andrew Maxwell...Michigan State has been able to rely on Le'Veon Bell for two games of over 200 yards, but Bell was limited by the Notre Dame front seven in the Spartans' loss to the Fighting Irish. And in that loss to ND in East Lansing, Maxwell was unable to move the football through the air. Against Ohio State, Bell should be able to be productive on the ground, but he won't be able to carry the offensive load. The first-year starting quarterback must develop rapport with someone other than Dion Sims, the tight end who has been Maxwell's safety valve. Receivers Keith Mumphery, Bennie Fowler and Tony Lippett must be able to stretch the field and help give this offense a vertical look. 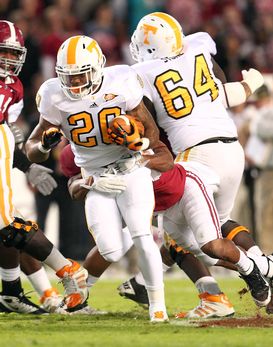 US PRESSWIRERaijon Neal will need to have a big game if Tennessee has any chance to knock off Georgia.

X-Factor: Vols running back Raijon Neal...What are some of the best ways to slow down an attacking, blitzing defense such as the one coordinator Todd Grantham fields every week for Georgia? Run right at the heart of the defense, use misdirection, utilize the screen pass and call for draw plays. Expect all of that in Tennessee offensive coordinator Jim Chaney's arsenal on Saturday in Athens when Derek Dooley begins a make-or-break four-game stretch against Mark Richt's Bulldogs. Neal will need to have a similar game as the one he had against Akron, because Vols quarterback Tyler Bray cannot single-handedly win this game for Tennessee.

Wisconsin at Nebraska: It appears that Badgers running back Montee Ball will play under the lights at Memorial Stadium after suffering a head injury last week. How effective will he be after enduring his second head injury in the last two months? Meanwhile, Cornhuskers dual-threat signal-caller Taylor Martinez has improved as a passer and has made this Huskers offense much more effective.

Texas at Oklahoma State: The Longhorns have the luxury of being able to rush just four, drop seven into coverage and still generate a serious pass rush. And that's bad news for a Cowboys passing attack that still has not named their starting quarterback. What's worse news is that Longhorns defensive coordinator Manny Diaz still loves to utilize exotic blitzes, so the Pokes' signal-callers will have a tough task on Saturday in Stillwater.

Baylor at West Virginia: The Mountaineers begin Big 12 play with a matchup against Baylor, which boasts a similar high-octane offense. Dana Holgorsen's squad gets a boost from the return of running back Shawne Alston, which should help an already-stellar offense. And Baylor doesn't have the defensive prowess to contain Geno Smith and Co.

Arkansas at Texas A&M: These teams played a classic last year at Cowboys Stadium, but Razorback fans fear that this one can get out of hand after some of the efforts they've seen from John L. Smith's squad the last few weeks. Defensively, Arkansas has not improved under new coordinator Paul Haynes. Can Aggies freshman dual-threat signal-caller Johnny Manziel continue the Hogs' woes?

Oregon State at Arizona: It seems like Mike Riley's Beavers are still going under the radar. But better line play on both sides of the ball have this squad sitting at 2-0 but heading into a tough environment in Tucson.